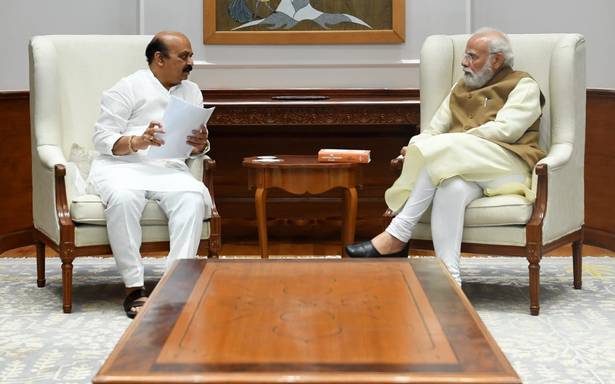 Invited by CM for launch of work on Bengaluru suburban rail, inauguration of BASE University

Chief Minister Basavaraj Bommai called on Prime Minister Narendra Modi in Delhi on November 11. He invited the Prime Minister to Karnataka in December to lay the foundation stone for the Bengaluru suburban rail network, inauguration of Dr. B.R. Ambedkar School of Economics (BASE) University building in Jnana Bharati campus of Bangalore University, and inauguration of 180 industrial training institutes that have been upgraded.

During an hour-long meeting with Mr. Modi, the Chief Minister also discussed various decisions taken by his government during the first 100 days in office.

Mr. Bommai said the Prime Minister appreciated many of the government’s decisions, particularly the ‘Chief Minister Raitha Vidya Nidhi’, a scholarship programme for children of farmers from 2021-22 academic year. The government has set aside ₹1,000 crore for providing scholarships, ranging from ₹3,000 to ₹11,000 per year.

Mr. Modi appreciated the decision to set up a committee headed by a retired High Court judge to scrutinise the tendering process of various development projects, which would ensure transparency and eliminate unrealistic estimations.

On providing houses to the houseless and sites to the poor, the Prime Minister told the CM to involve gram panchayats in identification of beneficiaries and utilise funds from the Pradhan Mantri Awas Yojana (PM housing scheme).

Mr. Bommai said the Prime Minister suggested formulation of new schemes for upliftment of women belonging to SC/ST and OBC categories for their economic empowerment. When Mr. Bommai cited the lack of interest shown by banks in lending, the Prime Minister assured that he would issue suitable directions to banks on the matter.