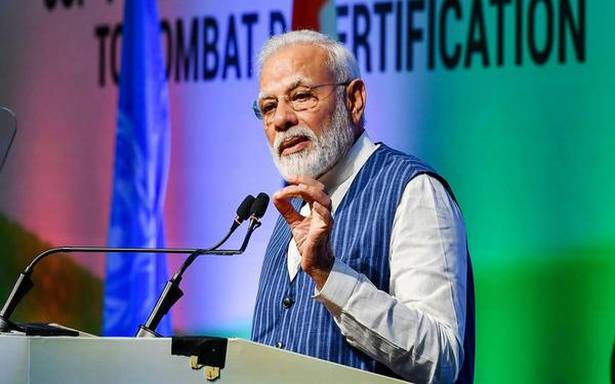 Days before the UN convention commenced, Environment Minister Prakash Javadekar had announced that India was aiming to restore 50 lakh hectare of its degraded land by 2030

Days before the UN convention commenced, Environment Minister Prakash Javadekar had announced that India was aiming to restore 50 lakh hectare of its degraded land by 2030.

Speaking at the high level segment at the 14th session of the Conference of Parties (COP) to the United Nations Convention to Combat Desertification (UNCCD), Modi said between 2015 and 2017, India’s tree and forest cover increased by 0.8 million hectares.

“India looks forward to making effective contribution as we take over COP presidency for two years. We have also increased our tree cover between 2015-17 by 0.8 million hectares.”

“I would like to announce that India will raise its ambition of the total area that will be restored from its land degradation status — from 21 million hectare to 26 million hectare between now and 2030,” the prime minister said.

Addressing nearly 200 nations, 70 environment ministers and over 8,000 participants from across the globe, Modi urged the world to stop using single-use plastic which was a menace for the land and environment.

“Another form of land degradation, which if not prevented, would become impossible to reverse. This is the menace of plastic waste. Apart from having adverse health implications, this is going to render land unproductive and unfit for agriculture.”

In his address, Modi noted that climate change is also leading to land degradation of various kinds, ranging from a rise in sea levels and wave action, erratic rainfall and storms, and sand storms caused by hot temperatures.

“When we address degraded lands, we also address water scarcity. Augmenting water supply, enhancing water recharge, slowing down water run-off and retaining moisture in the soil are all parts of a holistic land and water strategy,” he said.

“India’s prime minister is fully committed towards achieving sustainable development goals. We have already achieved half the target of installing 175 gigawatt (GW) of renewable energy by 2022. The PM promoted solar alliance which is working fine. We have promoted e-vehicles, and increased our green cover as well,” Javadekar said.

Highlighting the efforts being made towards combating land degradation and climate change, Modi said India takes pride in using remote sensing and space technology for multiple applications, including land restoration and it will be happy to help friendly countries develop land restoration strategies through cost effective satellite technology.

“We in India take pride in using space technology in multiple actions including land degradation and we’ll be happy to help other countries to combat it through cost effective space technology,” he said.

It was also announced that India will setup a global technical support institute for the member countries of the UNCCD for their capacity building and support regarding the Land Degradation Neutrality.

Land degradation neutrality has been defined by the parties to UNCCD as a state whereby the amount and quality of land resources, necessary to support ecosystem functions and services, remains stable or increases within specified temporal and spatial scales and ecosystems.

Modi said India would be happy to propose initiatives for greater South-South Cooperation in addressing issues of climate change, biodiversity and land degradation.

He also called upon the leadership of UNCCD to conceive global water action agenda which is central to Land Degradation Neutrality strategy.

“We have created the Jal Shakti Ministry to recognise the value of water in all forms. Zero liquid discharge policy has been imposed on many industries,” he said.

Speaking at the conference, Amina J Mohammad and Thiaw appreciated India for hosting the event but cautioned that the issue of land degradation was critical.

“This is critical. We need to move beyond discussions. The latest data we have shows that one third of greenhouse gases are emitted from land degradation. Half the people on earth are affected by the impact of climate change and natural calamities. We cannot ignore it,” Mohammad said.

Gonsalves said land desertification was the biggest environment challenge which the world was facing.

“Desertification has been identified as the greatest environmental challenge of our time and climate change is making it worse. Climate change along with human activities have facilitated land degradation which poses threat to humanity and potentially dire consequences,” he said.

The conference, from September 2 to September 13, has nations brainstorming on ways to tackle land desertification with over 120 countries setting land degradation neutrality target for 2030.

The New Delhi Declaration, the outcome of the conference which will lay down measures to combat desertification, is likely to be released on Tuesday.