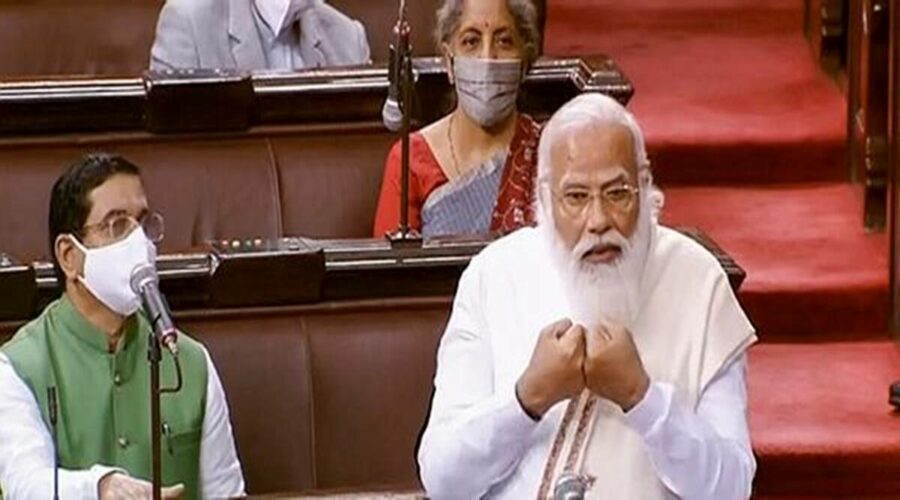 Responding to the Motion of Thanks of President Ram Nath Kovind’s address, PM Modi said the three farm laws should be given a chance, adding that the Minimum Support Price (MSP) system is here to stay.

1) Reading out a quote by former prime minister Manmohan Singh, PM Modi said, “Those taking a U-Turn (farm laws) will perhaps agree with him. ‘There are other rigidities because of marketing regime set up in 1930s which prevent our farmers from selling their produce where they get highest rate of return. It is our intention to remove all those handicaps which come in the way of India realising its vast potential at one large common market.”

2) “Sharad Pawar ji, and those from Congress, everyone… all governments have stood for agricultural reforms. Whether they were able to do it or not, but everyone has advocated that it should be done,” PM Modi said in response to Opposition protesting against the farm laws.

3) PM Modi, referring to the criticism from abroad over the farmer protests, said that India must save itself from ‘Foreign Destructive Ideology’.

“The nation is making progress and we are talking about FDI but I see that a new FDI has come to the fore. We have to protect the nation from this new FDI. We need Foreign Direct Investment but the new FDI is ‘Foreign Destructive Ideology’, we have to protect ourselves from it,” the Prime Minister said in Rajya Sabha.

5) PM Modi said that India is proud of its Sikhs. “What have they not done for this country? Whatever respect we give them will always be less. I’ve been fortunate to spend crucial years of my life in Punjab. The language used by some for them &amp; attempt to mislead them will never benefit the nation,” he added.

“Bajwa sahab from Congress was also speaking. He was speaking in such detail that I thought he will reach Emergency (period) shortly and speak on it, he is just one step away from it. But he didn’t go there. Congress disappoints this country a lot, you did that too.”

“I was listening to Derek ji, he had chosen good words – Freedom of Speech, Intimidation. When I was listening to him, I was wondering if he is talking about Bengal or the country. He sees all this for 24 hours, so he might have said the same here too.”

The Prime Minister said India is the “mother of democracy.” Expressing gratitude to all the parliamentarians, Modi said the credit for battling the pandemic goes to the citizens and not to the government.

“India is not only the world’s largest democracy, but also the ‘Mother of Democracy’ and this is our ethos”, he added.

02/08/2021 India Comments Off on PM Modi’s top quotes: Was wondering if Derek is talking about Bengal or country
TV & Movies