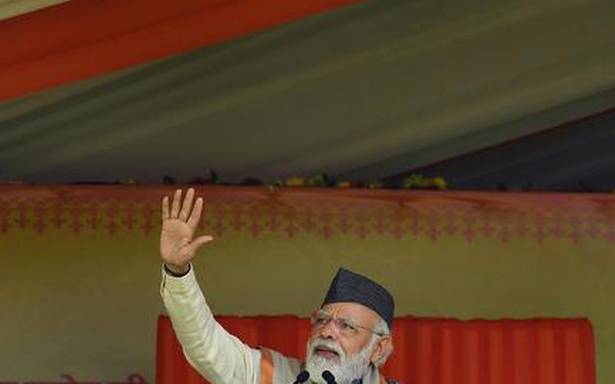 Following a sudden spike in Omicron cases, Prime Minister Narendra Modi has put off his visit to Abu Dhabi and Dubai next week, when India and the UAE were expected to announce a limited free trade agreement.

Mr. Modi was due to visit Abu Dhabi for official meetings and then travel to the Dubai Expo to tour the India pavilion on January 6. Diplomatic sources said the visit had now been postponed to a later date, but not cancelled.

The highlight of the PM’s UAE visit was to have been the signing of a partial FTA after formal talks were launched in September between Commerce and Industries Minister Piyush Goyal and UAE Minister for Foreign Trade Thani bin Ahmed Al Zeyoudi. An industry source said a limited or “early harvest agreement” — not including investments and services — had been finalised as per the plan, by December-end.

“As of now only goods from both sides are to be covered in the India-UAE early harvest agreement,” the sources said. Trade representatives on both sides would continue to work on concluding a larger Comprehensive Economic Partnership Agreement (CEPA) that would include more investment protection measures as well as special facilities for Indian labour and expatriates by March 2022, the source added.

The UAE is India’s third largest trading partner after the United States and China. If the CEPA is signed, it would mark the first Indian FTA in the region, after India and the Gulf Cooperation Council (GCC) abandoned FTA talks in 2008, and the first of about five trade deals that the Modi government is negotiating at present including with Australia, the United Kingdom, the European Union, Canada, Israel etc.

Civil aviation officials have been working separately on an updated Bilateral Air Services Agreement that would allow more flights from more airports between India and the UAE, but have failed to conclude talks thus far.

Apart from bilateral talks with UAE’s Sheikh Mohammed bin Rashid Al Maktoum, Prime Minister Narendra Modi was also due to discuss multilateral cooperation in a number of areas. These include the India-Israel-UAE-U.S. Quadrilateral economic partnership that was announced during External Affairs Minister S. Jaishankar’s visit to Israel in October, as well as coordination at the UN Security Council, where the UAE will begin its non-permanent term on January 1.

Mr. Jaishankar, who has made two visits to the UAE in the past two months, was due to visit against in January for the first in-person meeting of the newly announced “Quad”.

The postponement of the Prime Minister’s visit is the latest in a series of foreign tours that were cancelled in the past year due to the COVID pandemic, although Mr Modi was able to travel to Bangladesh, Italy and UK in 2021.

With the number of cases from the Omicron variant of the Coronavirus growing, the government has also brought in new travel requirements, which could affect incoming travel as well. In particular, they will cast a cloud over the upcoming Vibrant Gujarat summit to be inaugurated by Mr. Modi on January 10, where a number of foreign dignitaries including governors and heads of Far Eastern Federal Districts from Russia are expected to participate, along with local Embassy officials from about 20 partner countries.

While an MEA official said there was no change in the programme thus far, given the sharp jump in COVID cases, the programme may be open to revision.