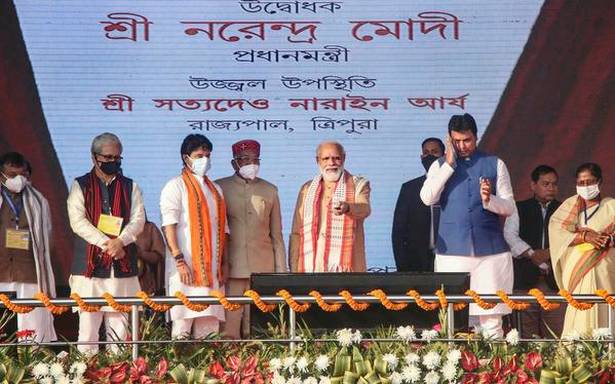 Integrated complex built at a cost of ₹450 crore

Prime Minister Narendra Modi on Tuesday inaugurated a state of the art terminal building of the Maharaja Bir Bikram Airport in Agartala on Tuesday. The integrated complex has been built at a cost of ₹450 crore over an area of 30,000 square metres.

The airport was originally built by the U.S. Air Force during the Second World War in collaboration with King Bir Bikram Kishore Manikya Debbarman of the erstwhile princely State. It was formerly known as the Agartala Airport and renamed after the BJP-led coalition government came to power in 2018.

After arrival, he enquired about the facilities at the new building. Mr. Arya, Mr. Deb, Mr. Scindia and senior Civil Aviation Ministry officials welcomed him.

Airport officials said the large terminal complex was supported by latest IT network, sophisticated equipment and all modern amenities. The work of airport expansion and the new terminal building was launched in 2016.

The inauguration of the new terminal is seen as a first step to make the airport operational as an international airport owing to the State’s proximity to Bangladesh and accessibility to southeast Asian countries.

In February 2019, Mr. Modi unveiled a statue of Maharaja Bir Bikram outside the old terminal building. The king, who is credited with several development projects and establishment of educational institutions, died at an early age of 39 – two and half years before the princely State merged with the Indian Union.