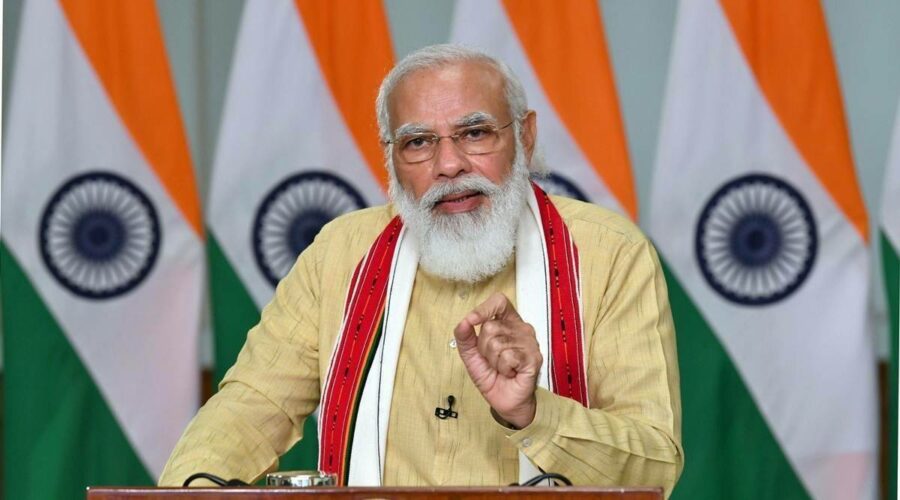 Modi, who formally launched the national vehicle scrapping policy, said Alang in Bhavnagar, which has the infrastructure and manpower to break ships, could become a “big hub for scrapping of vehicles”. Those who scrap their old vehicles will get a waiver on the registration fee for their new vehicle, and will be entitled to relief in road tax, Prime Minister Narendra Modi said on Friday. Modi, who formally launched the national vehicle scrapping policy, said Alang in Bhavnagar, which has the infrastructure and manpower to break ships, could become a “big hub for scrapping of vehicles”.

“Today, the national automobile scrapping policy is being launched. This policy will give a new identity to mobility of New India, and the automobile sector. This policy will play a big role in modernising the country’s vehicle population and removing unfit vehicles from the roads in a scientific manner,” Modi said while launching the policy virtually at an investors’ meet at Mahatma Mandir in Gandhinagar.

New technologies in mobility not only reduce cost of travel and transportation, but also help in economic growth, Modi said. “It is the need of the hour that India targets clean, congestion-free and convenient mobility in the 21st century,” he said.

The new vehicle scrapping policy, which is an important part of “circular economy”, will attract Rs 10,000 crore worth of new investments in the country, Modi said.

Explained: Why scrap old cars, and how

On Alang, where 8,300 ships have already been broken and recycled, the Prime Minister said: “In this entire region, the infrastructure and skilled manpower (needed for scrapping) exists. So after ships, Alang can also become a big hub for scrapping vehicles.”

Bhavnagar has 80-odd units that operate induction furnaces, and 60-65 steel re-rolling mills, which recycle scrap salvaged from ships that come to the Alang Shipbreaking Yard.

Modi oversaw virtually the signing of six MoUs to set up registered vehicle scrappage facilities (RVSF) in Gujarat, and one in Assam. In his speech, he said the new policy would provide a boost to the country’s automobile and metal industries.

“During last year, Rs 23,000 crore worth of scrap steel was imported, because the scrapping that currently happens in India is not productive. Energy recovery is almost nil. The entire value of high strength steel alloy is not recovered. The recovery of rare metals also doesn’t happen,” Modi said. When scrapping is done in a scientific manner, it will be possible to recover rare earth metals that drive modern technology, he added.

The scrapping policy will also benefit common car owners, the Prime Minister said. “A certificate will be provided to the owner for scrapping their old vehicle. Those having this certificate will not need to pay any registration fee while buying a new vehicle.

“Secondly, some allowances will be given in payment of road tax. There will be savings in the cost of repair, maintenance, and fuel of the old vehicle,” he said. The new policy would ultimately reduce road accidents and improve health because of the reduction in vehicular pollution, he said.

Union Road Transport and Highways Minister Nitin Gadkari, who was present at the event in Gandhinagar along with Chief Minister Vijay Rupani, said 450-500 vehicle fitness centres would be opened under the new policy.

“There are about 1 crore vehicles in India that are plying on the roads without valid fitness… Compared to new vehicles, the old vehicles are 10-12 per cent more polluting. These old vehicles also pose a safety hazard,” Gadkari said.

Only those vehicles that fail a fitness test would be scrapped under the new policy. The primary criterion for scrapping a vehicle would be its “fitness”, not its age, Gadkari said. “So we are encouraging the setting up of automated fitness centres in the PPP mode in every district in the country,” he said.

Gadkari said that alongside developing Alang as an “integrated scrapping hub” for both ships and vehicles, an industrial cluster for scrap could be created at Kandla, where scrap from neighbouring countries that do not have scrapping facilities, arrives. “We dream to make India the scrapping hub of Southeast Asia. Scrapped vehicles from Bangladesh, Bhutan, Myanmar, Maldives, Nepal, Sri Lanka can be brought to Kandla,” he said.

Chief Minister Rupani said: “Due to the significant increase in the number of vehicles being registered in the state, it has become necessary that we scrap the old vehicles and develop facilities for the same.”