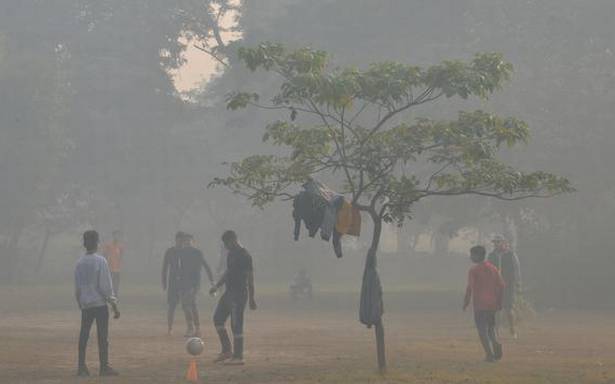 Lawyer says pollution is not winter’s tale, court hearing should not be confined to winter months

A senior advocate in the Supreme Court has written to apex court judges to hold full-fledged, back-to-back hearings to resolve the pollution crisis.

The parent of one of the three children who moved the apex court to ban firecrackers, senior advocate Gopal Sankaranarayanan, said pollution is not a ‘winter’s tale’. The focus on pollution should not be confined to a few court hearings in the winter months.

The evil has spread its tentacles outside the capital. Pollutants claim a child every three minutes. Filthy air broadens the great divide between the rich and the poor, even among children, Mr. Sankaranarayanan observed.

He acknowledged that he is “privileged to have cleaner air waft through ventilated machines, of vacations that allow us to escape, of cars with rolled-up windows, of access to health care and of even courtrooms with air purifiers”.

“But what about the small, grey faces at traffic lights blinking cheerfully at us as they peddle their wares? Or the thousands in Kumhar colony who use choking wood-fires for their daily bread? And the tiny bodies rummaging on the disgraceful landfills of Bhalswa, Okhla and Ghazipur as they inhale hydrogen sulphide? As also the millions across the country, because this is no longer a Delhi problem, as the readings from Chennai last week will stand testament,” Mr. Sankaranarayanan wrote.

A Bench led by Chief Justice of India N.V. Ramana is hearing the pollution case. In the last hearing, the CJI reproached the “apathy” of bureaucracy who fail to take preventive steps before the pollution graph goes off-charts, waiting for the apex court to pass judicial orders.

“As each minute micron of the PM2.5 comes to rest on the surface of a child’s lung, never to leave, we are made grimly aware of a shadow enveloping us – of future years with pulmonary disorders, collapsed lungs and worse,” Mr. Sankaranaraynan shared an anxiety shared by the court since 1985, when the first case against air pollution was filed by advocate and activist M.C. Mehta.

“More than 1 crore children in the last quarter of a century did not live past their fifth year because of Lower Respiratory Tract Infection (LRI) occasioned by air pollution. A Lancet Report from last year said that 1.7 million deaths of Indians were due to the poison that was being breathed, which was estimated to be a ₹2,60,000 crore loss to the economy (about 1.5% of the GDP),” he noted.

The senior lawyer said air pollution is not a political issue. It carries no religion, caste or colour.

“It claims all, and yet leaves no trace that could be profitable at the hustings… Unfortunately, as pithily observed by the Chief Justice, the bureaucracy’s apathy when coupled with political disregard leaves the issue yet again at the doors of the court,” the senior advocate urged the court..

He said the time has come for a full-fledged hearing in the apex court.

“A few weeks from the court’s calendar would be a small price to pay if we can shepherd our children to a better tomorrow. Till then, we can hold our breath,” Mr. Sankaranarayanan concluded.