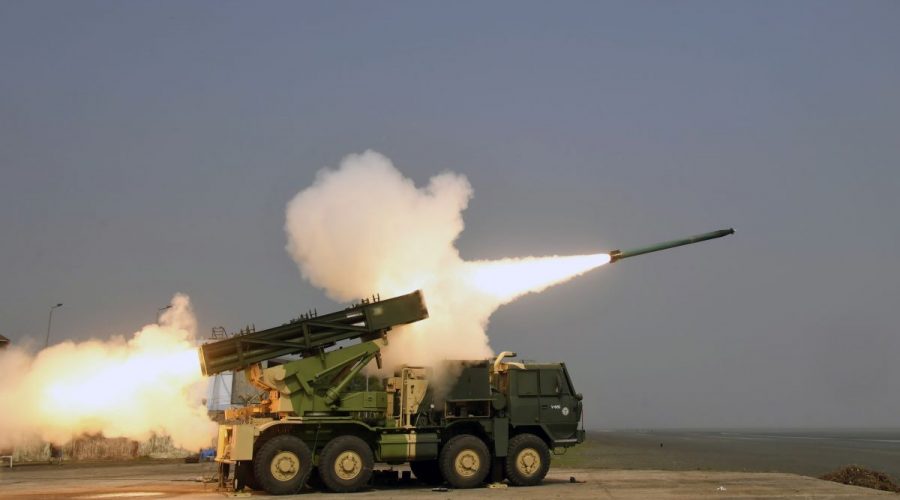 A salvo from a Pinaka battery brings down on the enemy more than seven tonnes of high explosive in just 44 seconds.
Ajai Shukla reports.

The Pinaka multi-barrelled rocket launcher is an important indigenous project aimed at providing the Indian Army with firepower superiority that would reduce casualties to soldiers in war.

Each Pinaka launcher has 12 tubes, each one firing a rocket that plasters the enemy with 100 kg of high explosive.

A salvo from a Pinaka battery, which fields six launchers, brings down on the enemy more than seven tonnes of high explosive in just 44 seconds.

So far, the army has fielded the Pinaka Mark I, with a range of 37.5 km and limited accuracy of about 500 metres.

The Enhanced Pinaka has demonstrated twice that range and an ability to strike within 10 metres of where it is aimed.

‘(The) Enhanced Pinaka rocket, developed by the DRDO, has been successfully flight-tested from Integrated Test Range, Chandipur off the coast of Odisha (on November 4). A total of six rockets were launched in quick succession and the tests met complete mission objectives,’ stated a ministry of defence release.

I visited ARDE Pune, and its sister laboratory, High Energy Materials Research Laboratory, for a rare briefing on the Pinaka MBRL programme and its warhead. HEMRL has developed the Pinaka warhead.

The Pinaka Mark I entered development in 1988 and a prototype version was deployed in combat during the Kargil War of 1999.

After it was proven in user trials in 2002, production orders were placed. Currently, four Pinaka regiments are in service and another six are under procurement.

In 2016, the army realised that the ‘free-flight’ Pinaka Mark I rockets would have only limited accuracy and asked the DRDO to try and provide a guidance kit to each individual rocket.

ARDE took up the Enhanced Pinaka project, setting goals that would make the Pinaka a world-class rocket.

In January 2017, ARDE demonstrated the first flight of the Enhanced Pinaka. The army had asked for a range of 60 km, but ARDE achieved 75 km in the very first flight.

Against a desired accuracy of 30 metres, the Pinaka proved it could strike within 10 metres of the target.

“This high accuracy means that just two Enhanced Pinaka rockets must be fired to assure a kill probability of more than 99 per cent,” says ARDE Director V Venkateshwar Rao.

The accuracy and range that the DRDO claims for the Guided Pinaka puts it on a par with the US army’s M270 Multiple Launch Rocket System, which boasts the same accuracy figures.

Key to the Enhanced Pinaka’s success is a guidance system that combines an inertial navigation system with satellite navigation.

The rocket’s guidance system has been integrated with the Indian Region Navigation Satellite System — the Indian version of the Global Positioning System that the US invented. A constellation of IRNSS satellites is already deployed.

“Most rockets and missiles, which are not tube-launched, have plenty of space on board. But in the Pinaka, which is launched from a 214 mm-wide tube, space is critical. It is a technological challenge to house the on-board computer, telemetry, power supply and navigation system inside such a small rocket,” explains ARDE Director Rao.

The continuous in-flight guidance the Enhanced Pinaka receives corrects for inaccuracies imposed by meteorological conditions such as stiff winds. This eliminates the requirement of a meteorological radar.

So far, the Ordnance Factory Board has been manufacturing the Pinaka Mark I rocket, but the army and the DRDO have decided to create a second source of supply in the private sector.

The army has already floated a tender with the private industry for about 11,000 Pinaka Mark I rockets.

(The Enhanced Pinaka) rockets tested have been manufactured by M/s Economic Explosives Limited, Nagpur, to whom the technology has been transferred,’ stated the defence ministry.

The army’s total requirement of Pinaka units is of the order of 22 regiments, all of which will be modified with electronic kits. That will allow them to fire both Pinaka Mark I and Guided Pinaka rockets.

The Enhanced Pinaka provides the army with a weapon for accurately striking deep-lying targets, such as terrorist camps across the Line of Control, eliminating the need to risk soldiers or aircraft in cross-border ‘surgical strikes’.

This weapon could also support wartime attacks under the army’s Cold Start plan, which involves capturing enemy positions in lightning strikes before they can be reinforced.

The volume and precision of firepower that a Pinaka regiment brings down would stun defenders and leave attacking forces with an easy task.