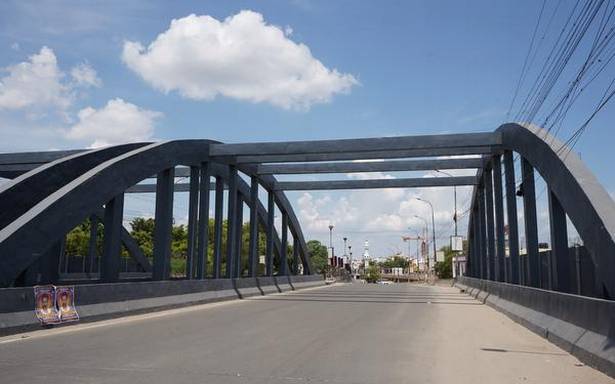 It is being renovated under Smart City project

After inspecting the renovation work underway under Smart City project, along with Corporation Commissioner, K.P. Karthikeyan on Thursday, Mr. Venkatesan said that the work that was started in January 2019 has been inordinately delayed.

“The women, children and the elderly people are being put to lot of inconvenience as a result of the delayed work,” he said.

Mr. Venkatesan was, however, critical about the design of the renovated bus stand.

While the Smart City project had laid emphasis on increasing the facilities and decongesting the cities, the planners made huge blunders in providing lesser space for the bus and and more space for the commercial buildings.

The Smart City Advisory Committee meeting would be held on September 17 when the quality of work and the reason for a wrong design would be taken up for discussion, the MP said.

Meawhile, the officials have planned to introduce one-way traffic on Ellis Nagar Road Over Bridge. “The signal (at Kattabomman statue junction) would be done away with and vehicles would not be allowed to turn towards Ellis Nagar ROB. Instead, the vehicles will go through South Veli Street and take the ROB through the road inside the bus stand to ease traffic at the junction,” said Mr. Karthikeyan.

Similarly, a pedestrian tunnel has been proposed to link the bus stand with Madurai Railway junction so that passengers can have a safe passage without having to come to the road.

The work on commercial buildings in the bus stand is expected to be completed by December 2021, the MP said.