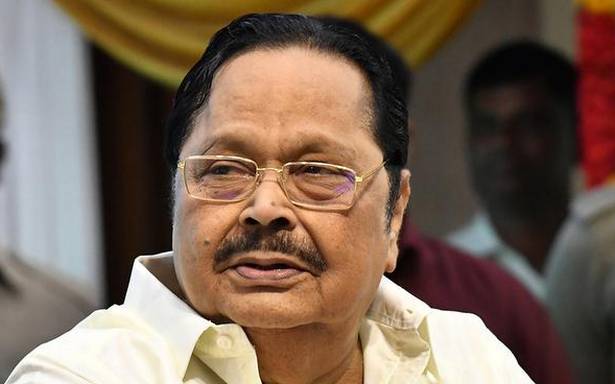 DMK general secretary Duraimurugan on Sunday said Chief Minister Edappadi K. Palaniswami had no locus standi to criticise DMK president M.K. Stalin since the only achievement of the AIADMK was that even its former Chief Minister [Jayalalithaa] faced a disproportionate wealth case and went to jail.

Reacting to Mr. Palaniswami’s claim that the AIADMK had given the best government to the State, Mr. Duraimurugan said the AIADMK had seen four Chief Ministers and one of them went to jail in a corruption case.

As for Mr. Palaniswami’s call to the party cadre to chase away the enemies of the AIADMK, Mr. Duraimurugan contended that the people of Tamil Nadu were ready to chase the AIADMK away and the intelligence wing of the police had not informed the Chief Minister of the prevailing trend in the State.

He said Mr. Palaniswami could not take credit for the 7.5% horizontal reservation for students of government schools in medical education since the Governor gave his assent to the legislation only after DMK president M.K. Stalin threatened to launch a protest.

Mr. Duraimurugan criticised Mr. Palaniswami for “admitting” that his government had thrown to the dustbin the petitions collected by the DMK during the COVID-19 pandemic.

“He has patted himself on his back even though his government failed in its efforts to contain the pandemic. His government has failed to release the financial assistance to the medical professionals who lost their lives in the battle against the novel coronavirus disease,” he also alleged.

Mr. Duraimurugan charged that the AIADMK government had pledged the rights of the State and paved the way for the introduction of NEET for admission to medical courses.