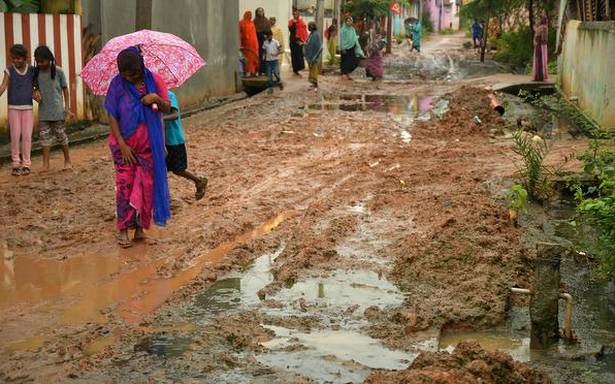 The residential areas in Ambikapuram, behind the Ariyamangalam dump yard, were inundated after Thursday’s rains. The leachate from the nearby dump yard had mixed with the rainwater and was stagnating on the streets. There has been no action despite several petitions submitted to the district administration, residents complained.

As it continued to rain throughout the day, the people struggled to navigate streets inundated with black-coloured water. The area, which is located immediately after the Ariyamangalam dump yard on the Thanjavur Road also stinks due to the smell emanating from the yard. The problem has persisted for years, the residents say.

Leachate is a cause of concern as it could lead to infections and diseases. The water has also seeped into the ground and water pipelines. While the authorities laid a gravel path on the main road, that has only made matters worse. “There is no way for the water to seep through the tightly packed gravel and flows on either side onto the streets and in front of houses,” a resident said.

K. V. Ramalingam, State Secretary, Ambedkar Makkal Iyakkam, along with several residents had made representations to the School Education Minister, Anbil Mahesh Poyyamozhi, and the Tiruchi City Corporation. “Potable water coming from the taps is also black in colour. We have nowhere to go and nobody is helping us,” he said.

Ajisha Begum lives in a small house with a clay tile roof along with her children in Thideer Nagar. As she noticed that the pillars holding the house had become weak during last week’s rains, she had shifted to her sister’s house, which is two streets away. On Tuesday night, the roof caved in. “Had we been living here, we would have all died,” she said.

The residents said that they were planning to stage a protest on Thanjavur Road if the problem was not solved soon.