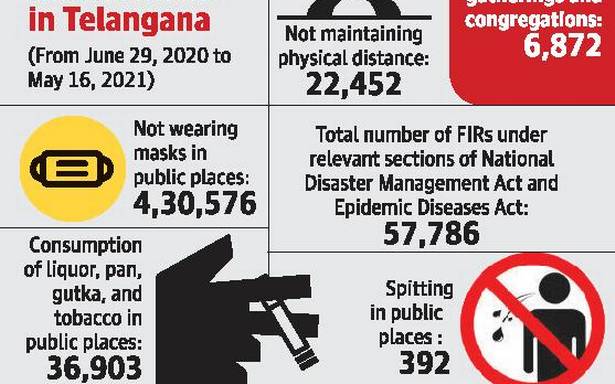 From fake medicines to fake prescriptions, they are trying every possible trick during lockdown

A borrowed Zomato or Swiggy T-shirt can be somebody’s ticket to roam around for fun during the lockdown. However, police in the State capital have sniffed out such cheap tricks and are clamping down with cases to teach the loiterers a lesson.

Recently, one such 25-year-old who borrowed his friend’s Zomato delivery T-shirt to escape police checkpoints, was caught by the LB Nagar police of Rachakonda Commissionerate.

The youth claimed that he was working for the app-based food delivery aggregator, but failed to show enough evidence or order booking.

When police seized his bike and questioned him, the youngster narrated the whole story and he was booked under Section 188 ( Disobedience to order duly promulgated by public servant) of IPC, and relevant sections of Disaster Management Act and Epidemic Diseases Act.

This was one of many such cases dealt by the police in the three urban police commissionerates — Hyderabad, Cyberabad and Rachakonda — or elsewhere in the State, on a daily basis. Everyday, the law enforcers are coming across such cases, where people are venturing out during lockdown hours for no reason. Excuses range from fake medical prescriptions to fake illness as well.

Some say they came out to buy medicines without even a prescription, or a forwarded one on WhatsApp, while others maintain that they were going/coming back from the hospitals after meeting their relatives who tested positive for the deadly virus. In fact, some people maintained that they were sick and on the way to the hospital to consult a doctor. “As we don’t know how to prove their claims, they are simply let off. What if he was really sick and required immediate medical assistance. We will be at fault,” said an officer.

The top cops are frustrated with how many people are coming up with lies and tricks to go out for just for the heck of it, while policemen remain on the ground in the summer heat to implement the lockdown.

On Sunday evening, a young couple was caught by the Jubilee Hills police for coming out during lockdown hours.

When questioned, the couple told police that they decided to go on a jolly ride as they were bored sitting at home.

A case was registered and they were left off as the woman was supposed to feed the newborn.

Everyday the Hyderabad city police alone is booking about 5,000 to 5,200 cases, while their counterparts in Cyberabad and Rachakonda register at least 1,000 each for lockdown violation.

“Since April 6, we have booked more than 1.12 lakh cases of not wearing masks in public places, not maintaining physical distance, and gatherings at public places,” City Police Commissioner Anjani Kumar told The Hindu.

He said that this time people have realised the impact of the virus and are voluntarily cooperating.

“However, black sheep in the society are taken for a task,” Mr. Kumar said.

Police chiefs of Cyberabad and Rachakonda, V.C. Sajjanar and Mahesh Bhagwat, respectively, said that they have registered about 7,500 and 9,633 cases since May 12.

“We are asked to implement lockdown effectively. Parameter for effective enforcement is that we must book more cases and seize more vehicles,” said a police inspector.