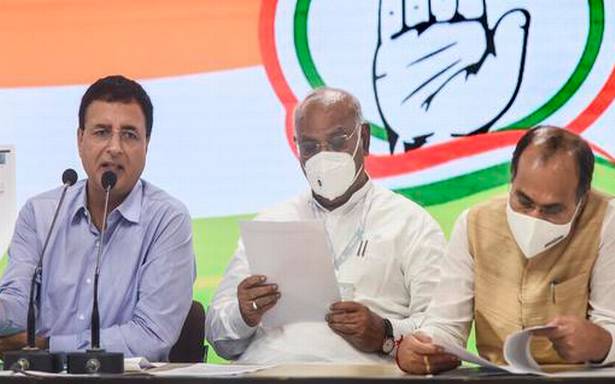 Randeep Surjewala said the Congress will take all Opposition parties on-board over the issue.

Accusing the government of “treason” and compromising on national security over the Pegasus spyware issue, the Congress on Monday demanded the sacking of Home Minister Amit Shah and a probe into the “role of Prime Minister” Narendra Modi in the matter.

Addressing a press conference in New Delhi, Congress chief spokesperson Randeep Surjewala held Mr. Shah responsible for the Pegasus spying issue and said his party’s first demand is his dismissal from the post he occupies.

He said the Congress will take all Opposition parties on-board over the issue and decided whether to ask for a judicial or parliamentary probes in the matter.

“Our first demand is the immediate sacking of Minister of Home and Internal security Amit Shah and a probe into the role of the Prime Minister in the matter,” he told reporters.

Leader of Opposition in Rajya Sabha Mallikarjun Kharge said Mr. Shah should immediately resign as he “does not deserve” to occupy the position he is holding.

Leader of Congress in Lok Sabha Adhir Ranjan Chowdhury said “Modiji promotes digital India, but what we are seeing is Surveillance India”.

Accusing the Modi government of murdering the Constitution, law and dismantling national security, Surjewala said it is guilty of “treason”.

“The Modi government is the deployer and executor of this illegal and unconstitutional snooping and spying racket through Israeli surveillance software Pegasus,” he said.

The government has denied any role in it.