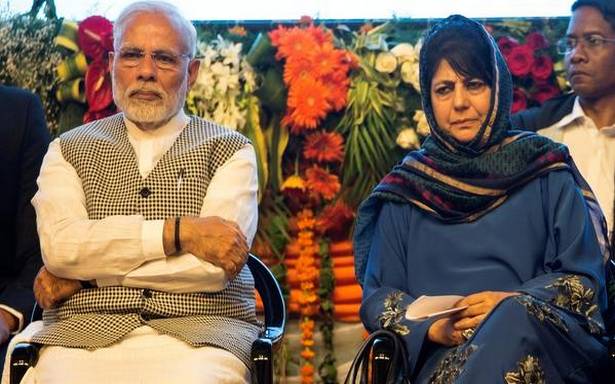 First such publication is released by party chief Mehbooba Mufti

In its first ever newsletter, the Peoples Democratic Party (PDP) on Thursday took potshots at Prime Minister Narendra Modi over his remarks to address “Dil ki doori, Dilli sey doori” (distance between hearts, and the distance from Delhi) during an all-party meeting held in June this year with the regional parties from Jammu & Kashmir.

“As part of removing ‘dil ki doori’, the government has fired several employees on the pretext of security. Speaking of security, extra judicial killings and never-ending arbitrary detentions enforced with draconian laws such as PSA [Jammu and Kashmir Public Safety Act], UAPA [Unlawful Activities (Prevention) Act] and AFSPA [Armed Forces Special Powers Act] are hurling us back into the [19]90s at lighting fast speed,” the newsletter, which was released by PDP president Mehbooba Mufti, said.

The newsletter reflected the hardening position of the party. “Kashmiris don’t need a direct flight to Sharjah. They want to be able to walk the streets without fear of being killed. You could give us a round trip to the moon but it would make no difference when frequent curfews and military barricades prevent us from going to the other side of town. So much for Modi-ji removing Kashmir’s ‘Dil ki doori’. Perhaps, it is best we kept our distance,” it said.

Referring to the Hyderpora operation of the security forces that allegedly left four persons, including three “civilians” dead, the PDP newsletter said, “Such killings are not only condoned by the Indian government but they are incentivized with monetary bonuses and rewards. The message is borne home: to the Centre, Kashmiris are cannon fodder and nothing more. Yet the propaganda machines churn and anyone that doesn’t embrace the BJP’s brand of patriotism is labelled as a terrorist. The devil works hard but BJP works harder,” it said.