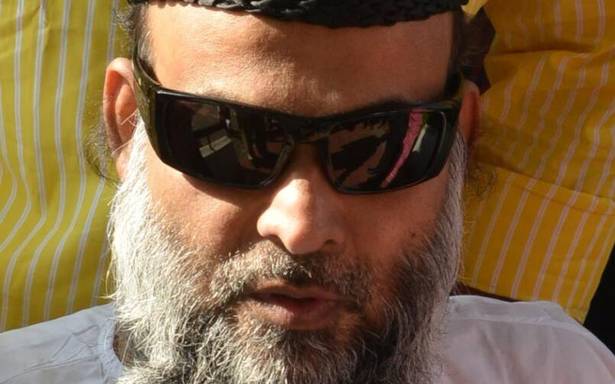 The court was hearing a plea to relax his bail condition and permit him to stay in his hometown in Kerala till the pendency of the trial in the 2008 Bengaluru bomb blast case in which he is an accused.

Chief Justice of India Sharad A. Bobde, heading a three-judge Bench of the Supreme Court, orally referred to People’s Democratic Party (PDP) leader Abdul Nazir Maudany as a “dangerous man” while hearing his plea to relax his bail condition and permit him to stay in his hometown in Kerala till the pendency of the trial in the 2008 Bengaluru bomb blast case in which he is an accused.

Mr. Bhushan said the PDP leader had lost a leg and referred to his medical condition to justify the plea for a relaxation of the bail conditions.

“Your Lordships, in 2014, had granted him bail but ordered him to stay back in Bengaluru,” Mr. Bhushan submitted.

However, the hearing was cut short when Justice V. Ramasubramanian, also on the Bench, voiced doubts about appearing for Maudany at some point in the past.

The court adjourned the hearing for next week in order to verify Justice Ramasubramanian’s query.

The Supreme Court had granted Maudany, represented by advocate Haris Beeran, bail in 2014 till the conclusion of the trial before a court at the Parappana Agrahara Central Jail in Bengaluru.

In 2014, the Supreme Court had granted the PDP leader bail on the ground that he had already undergone judicial custody for four years since August 2010 and was suffering from various health ailments. The Supreme Court’s bail came after the Karnataka authorities had undertaken to complete the trial within four months from November 14, 2014.

“More than six years have elapsed and the trial has still not been concluded. The trial was protracted on account of the lethargic attitude of the respondent (State of Karnataka). The case before the trial court is crawling at snail’s pace and the progress of the trial was hampered on several occasions due to various reasons such as recall and re-examination of witnesses, transfer of special public prosecutor thrice, transfer of presiding officer thrice and now on account of the outbreak of COVID-19 pandemic,” Maudany’s present application said.

The prosecution miserably failed to adhere to the schedule of the trial fixed earlier, it said. “On many occasions the trial was delayed, even scuttled due to the inability of bringing the witnesses on time,” it said.

It said the recording of statement under Section 313 Cr. PC was under way. This had been going on for over a year and it was unlikely to get over in near future.

The application said the court did not have a presiding judicial officer at present.

“He (Maudany) has spent 11 years in jail since arrest and seven years under conditional bail,” the application said.

It highlighted that the health of Maudany was getting worse and suitable health care was not available due to the pandemic situation. Besides, the stay in Bengaluru was causing an excessive financial burden on him, the application said.