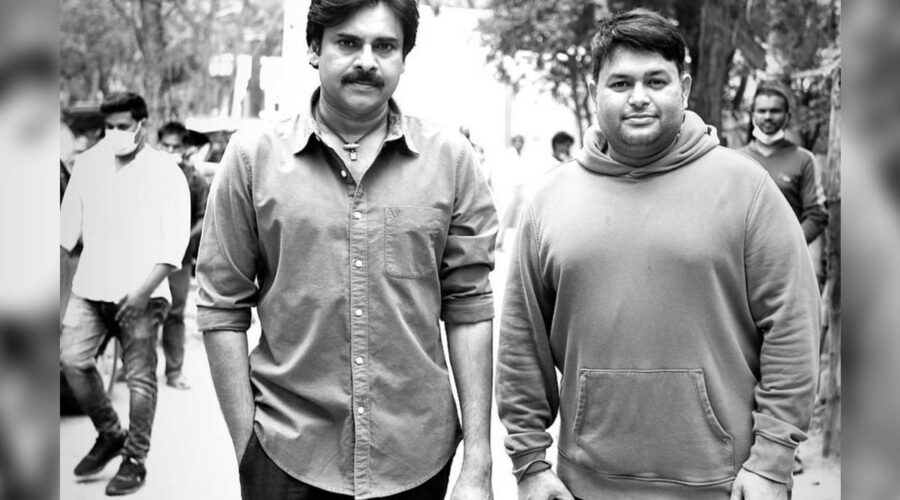 Pawan Kalyan’s new picture with the music director Thaman from Bheemla Nayak sets started trending. Directed by Saagar  K Chandra, the film is the Telugu remake of Ayyappanum Koshiyum and it also has Rana Daggubati in the lead role.  The upcoming action drama Bheemla Nayak will see  Power Star Pawan Kalyan back as a cop. While Trivikram  Srinivas penned the dialogues and screenplay for the film,S Thaman composed the music.

On the occasion of 50th birthday of Pawan Kalyan, the music composer Thaman  released the title song. Few days ago, the makers released Lala Bheemla song that lived  up to the expectations . It’s powerful lyrics,  intense composition, energetic singing, and hair-raising visuals were highlighted.  It was a feast to see Pawan Kalyan in a police officer getup and also in mass avatar in Lungi. In the backdrop, the female dancers from Odisha enhance the mass appeal. The interesting aspect  was  Trivikram Srinivas, who penned the screenplay and dialogues for the film.

The big budget entertainer is being produced by Suryadevara Naga Vamsi under Sithara Entertainments, the movie will clash with Prabhas starrer  Radhe Shyam as it is set to release on Sankranthi in 2022.