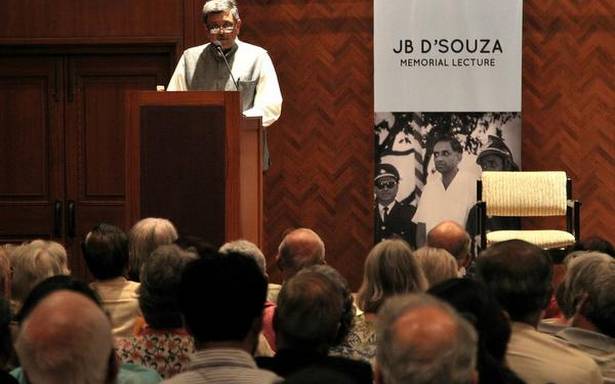 HC judge says country is being run by ‘bad’ bureaucrats

It is when the executive defends the indefensible that the courts have to overreach their judicial powers, Justice Gautam Patel of the Bombay High Court said on Monday.

Delivering the first JB D’Souza Memorial Lecture — titled ‘Mephisto in Mantralya: Whose government is it anyway?’ — on the noted public servant’s 90th birth anniversary, Justice Patel described D’Souza as “unflinching” and said, “The word embraces many things: dedication, commitment, courage and fortitude, unwavering fidelity to one’s principles, clarity of thought, and above all a vision of justice in its broadest and most elemental self.”

D’Souza’s son Ravi said his father had a multi-faceted personality and played many roles in the 86 years of his life. “He was a civil servant committed to the idea of public service, he was a sailor, a naval officer, a city planner, an urban development expert and a principal of an academic institute.”

Justice Patel said D’Souza had qualities once considered norms that required no special mention, but today are on the brink of extinction in the field of public administration.

He said high courts and the Supreme Court are often accused of straying illegitimately into the executive and legislative realms. “While this may be true in some cases, it is only when executive action is found again and again to be utterly indefensible and misguided that we see expansive judicial interventions.”

Moreover, he said, the criticism comes most often, and now predictably from the executive, about a complaint about a court holding some executive action unjustified in law. “[It] requires to defend the indefensible, so the response is to shoot the messenger and accuse the courts of judicial overreach. There is no attempt to understand, let alone correct, the faulty civic structures and processes that make judicial intervention inevitable,” he said.

While discussing the role of the executive, legislative and the judiciary, he said, “This country is being run by bureaucrats, [in fact] it is being ruled by bad bureaucrats, and this will not change unless we have more and more people from the civil society willing to [become] ‘public servants’ and the emphasis is on being a servant.” He ended the lecture by saying, we need more JB D’Souzas to keep a check on public administration.

06/03/2019 India Comments Off on Patel: courts overreach when executive action is misguided
India