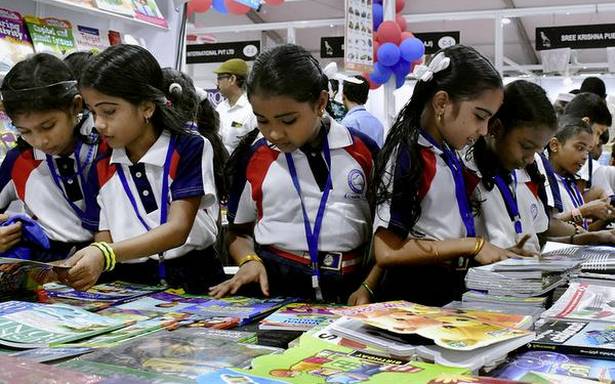 Short fiction writer T. Padmanabhan on Friday made it clear that he does not agree with the style of storytelling that reveals everything.

Talking about his life and writing at the ongoing Krithi International Book Festival at Marine Drive, he said several stories had left him feeling as if he had taken a blow on his head. “Those who say they don’t see writing as a means of making money, but are just revealing everything through their writing are actually out to mint money. Publishers queue up before these writers. I’m ashamed of talking about some stories. They are that distasteful,” Mr. Padmanabhan said.

He said he had not written a single line that could be called obscene. Love was always a theme for a writer. But he always tried to keep it without losing its warmth. Mr. Padmanabhan also registered his strong disagreement with Valentine’s Day being observed by the youth. “It’s the new media that has created such days. The day is a product of the new tendency to commercialise everything. But I don’t question the sincerity of purpose of observing the day,” he said. As a writer, he never made friends based on the colour of their flags, he added.

Writer N.S. Madhavan said whenever democracy suffered setbacks globally, at the hands of fascism, artists and art had gone silent. Just a poet got arrested in Kerala during the Emergency. Stories and poetry were weak. “For it to have some impact on people, something should be done when fascism is imminent. Once it has arrived, art and literature cannot do anything,” he said.

Novelist M. Mukundan said it was not easy to write when attempts were being made to eliminate those who produced literature of resistance.

Meanwhile, writer Vaisakhan, who is also president of the Kerala Sahithya Akademi, said India had never seen democracy. “What has happened here is a mimicry of democracy. While there’s a global tendency to tilt towards right wing politics, it’s been delayed in India thanks to Jawaharlal Nehru,” he said.

Krithi has crossed a milestone with books worth ₹1.27 crore sold to school students in the nine days of the event. With two more days to go, the target would be to reach ₹1.5 crore in this category.

The biographies of V.K. Krishna Menon, V.P. Menon, and the Hortus Malabaricus have takers at the fest.

The book on V.P. Menon has generated much interest nationally with Eeternal Affairs Minister S. Jaishankar locking horns with historian Ramachandra Guha and Congress leaders Jairam Ramesh and Shashi Tharoor over its content. Nehru had described Patel as the “strongest pillar” of his cabinet, they pointed out, citing his letters, to repudiate Mr. Jaishankar’s argument that Nehru had thought of leaving out Patel from his Cabinet.

Chief Minister Pinarayi Vijayan will inaugurate a session on the challenges faced by Indian democracy at the Krithi International Book Festival at 3 p.m. on Saturday. Tourism Minister Kadakampally Surendran will preside over the function, and writers Sunil P. Elayidom and Kashmiri writer Zaman Azurdah will deliver talks.