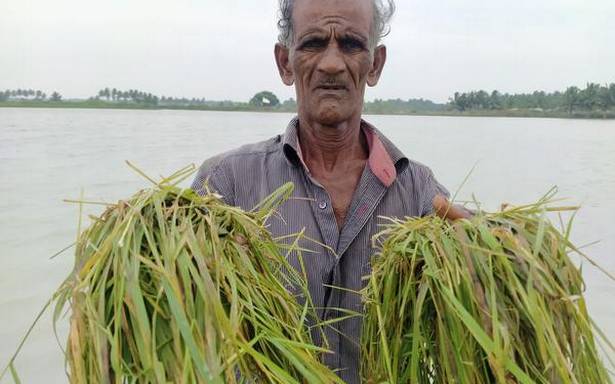 While the district administrations in the central region heaved a sigh of relief on Thursday due to the let-up in rainfall, submergence of samba paddy crop raised on hundreds of acres in delta districts including Thanjavur, Nagapattinam and Tiruvarur districts has left farmers worried.

Except for a few areas in Thanjavur, Mayiladuthurai and Nagapattinam districts, there was no rain in other areas since Wednesday afternoon. There were signs of rainwater receding in inundated areas with waist deep stagnation. Water in submerged paddy fields too began receding. But, the crop raised in large areas had remained under water for more than three days.

The standing samba paddy crop raised in Papanasam, Umayalpuram, Ramanujapuram, Thiruppananthal, Orathanadu and Peravurani were said to have been severely affected. Besides the Public Works Department officials, farmers to were working overtime to drain out the water from the paddy fields. Many of them were of the view that though rainfall in Thanjavur district was less when compared to Nagapattinam, Tiruvarur and Mayiladuthurai districts, improper and insufficient desilting works on supply channels prior to monsoon had led to severe water inundation.

“It is painful to see the submerged paddy crop for more than three days. The next three to four days are crucial,” says Swamimalai S. Vimalanathan, district secretary, Cauvery Farmers Protection Association.

S. Vijayakumar, Principal Secretary to the Government, who is the Monitoring Officer to the district, visited various areas, accompanied by Collector Dinesh Oliver Ponraj, for the third consecutive day to check the arrangements being made to mitigate the sufferings of the people and farmers.

Citing a preliminary report on flood damage Mr. Vijayakumar told The Hindu that the standing paddy crop raised on over 4,000 hectares had been affected due to water inundation in the district. Peravurani had received 20 cm of rainfall in a day on Tuesday. It had caused inundation on paddy fields in some areas. Similarly, a few causeways had been overflowing. A number of steps had been taken to drain out water from the fields and low-lying residential areas.

The respite from rain has brought much-needed relief to officials and farmers in Nagapattinam district, where Napattinam and Thirupoondi recorded 30 cm of rainfall on a single day on Tuesday.

Atulya Misra, Additional Chief Secretary to the Government, inspected the flood-hit areas along with Collector A. Arun Thamburaj.

“There has been no rain in the district since Wednesday morning. The rainwater is receding fast in many areas,” said Mr. Thamburaj.

He said that paddy crop on different stages had been inundated on 7,177 hectares in the district. It would recede in one or two days. A total of 249 huts and 23 concrete houses had been damaged so far in the spell.

According to a rough estimate, paddy crop raised on over 25,000 acres in Tiruvarur district have been affected by water inundation. Paddy crop in Tiruvarur, Kottur, Muthupettai, Kudavasal, Mannarkudi and Thiruthuraipoondi had been severely hit due to the heavy rain that lashed on Tuesday and Wednesday.

In Tiruchi, the Public Works Department continued to discharge the entire inflow at Upper Anicut in Mukkombu into the Kollidam on Thursday. More than 30,000 cusecs was released. The inflow in Koraiyar too came down to about 2,000 cusecs.

Officials said that paddy crop on 400 acres in Anthanallur and Manikandam blocks had been affected by water inundation.