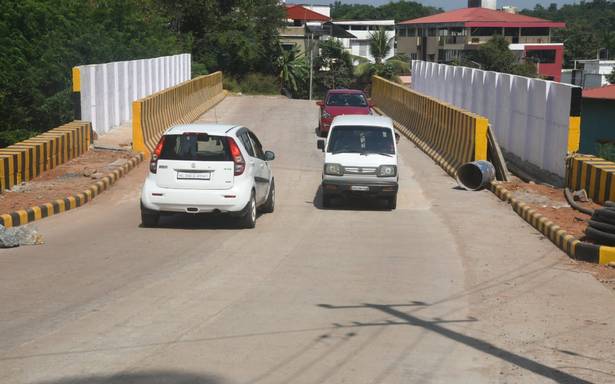 The new Road Over Bridge (RoB) over the Mangaluru-Mumbai railway line on the Bondel-Vamanjoor Road at Pachchanady was informally opened to motorists on November 23 following completion of work on approach roads.

In 2017, Southern Railway’s construction wing had dismantled the old 6-metre-wide and 9.25-metre-long RoB to facilitate doubling of the rail line between Mangaluru Junction and Panambur. The Railways had provided a temporary level-crossing, about 300 metres to the south of the old RoB. Delay in completing the new RoB had irked road users and local residents.

Though work on the RoB was completed in October, motorists were not allowed to use the bridge as the approach roads had not been built. The Bondel-Vamanjoor Road was closed for all kinds of traffic for over a month to facilitate construction of approach roads.

The new RoB has a width of 12 metres and length of 27.95 metres. It was built at an estimated cost of ₹5 crore, but the delay in completion of the work had irked road users.

Motorists had to wait for a long time at the level-crossing as the Mangaluru-Mumbai line is one of the busiest routes in India.

Dakshina Kannada MP Nalin Kumar Kateel and other elected representatives had urged the Southern Railway to complete the project at the earliest.