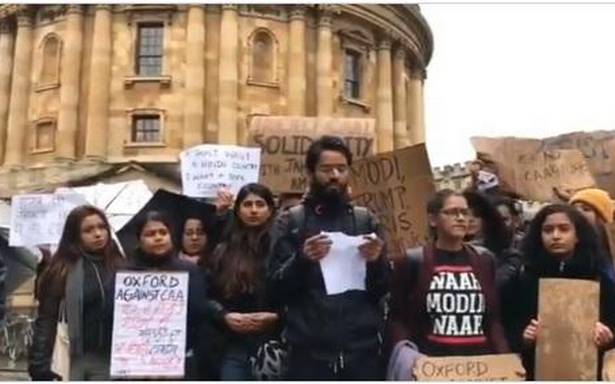 At least 430 students and research scholars at the University of Oxford have expressed “extreme concern” about the crackdown on students of various universities across India. A Solidarity Statement issued by the collective called for an immediate end for police crackdown on peaceful protests.

“Over the last week, we have seen many peaceful protests and demonstrations across India against the Citizenship (Amendment) Act, 2019. The Act stipulates preferential treatment to religious minorities from Pakistan, Bangladesh and Afghanistan in the process of acquiring Indian citizenship, while explicitly excluding Muslims from its purview. This explicit and blatant exclusion of Muslims from citizenship upends the long-standing fundamental ideals of equality, liberty, pluralism and secularism enshrined in the Constitution of India,” declared a statement issued by the collective that held a vigil and protest where the Preamble of the Constitution of India was read by the protesters.

The collective took note that the police used excessive force against unarmed students of the Aligarh Muslim University, Cotton University in Guwahati, the University of Delhi and Jamia Millia.

“The use of police force against students exercising their fundamental right to protest in university spaces and elsewhere is a direct attack on the foundations of a democratic society,” the Solidarity Statement from collective stated. The scholars expressed support for the struggle against the Citizenship (Amendment) Act 2019 that they described as “immoral and unconstitutional”.