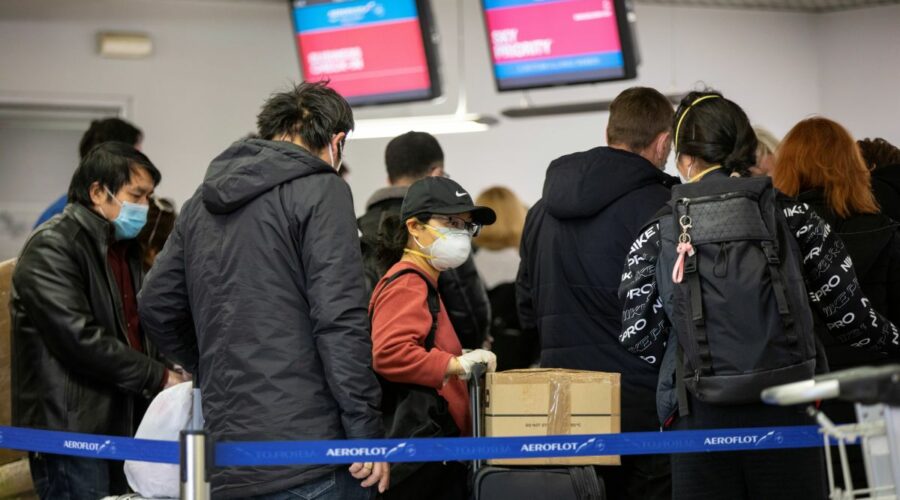 Serbia has become one of the transit points for Indians heading to Canada and the US. Canada requires passengers from India to take an RT-PCR test from a third country, while the US wants them to spend 14 days outside of India.
As a result, many students are taking the Serbia route to Canada, and the US.
Aneesh Phadnis and Vinay Umarji report.

When he left for Canada early on Sunday, Nikhil Parashar had no idea he would spend the next 24 hours at the Belgrade airport.

But a surprise seven-day quarantine requirement by the Serbian government put Parashar, a Delhi resident, and over 200 other Indians in a fix.

The Indian embassy in Serbia intervened and facilitated onward travel following their appeals for help.

The new quarantine rule came into effect on Friday, but Indian travellers were in the dark till they landed in Belgrade.

Serbia has become one of the transit points for Indians heading to Canada and the United States after the two countries banned their direct entry from April and May, respectively.

Canada requires passengers from India to take an RT-PCR test from a third country.

As a result, many students are taking the Serbia route to Canada, spending up to Rs 1.8 lakh on air tickets and two to three days of stay in Belgrade.

In the case of the US, a passenger needs to spend 14 days outside of India to be allowed into the country.

The US restriction does not apply to certain categories, including its own citizens and permanent residents.

Parashar, who tweeted about his Belgrade experience, said he had no information about the changed rule till he landed there.

‘The border guards refused us entry. Many students don’t have money to stay in Serbia for seven days and want to reach Canada.

‘There are families with children who are stuck at the airport, too. The Indian embassy helped us,’ he said.

In a tweet, the Indian embassy said 120 of the 205 stranded Indians would travel by Lufthansa on Monday.

Indians travelling by other airlines will fly on Monday or Tuesday.

Embassy officials are in touch with the airport authorities and airlines to ensure departure of all Indians, it said.

The embassy did not respond to an emailed query.

‘We are working closely with Serbian authorities and the Indian embassy to support our passengers,’ Lufthansa said in a statement.

Serbia allows visa-free entry to Indians for 30 days. As a result, the country has turned into a tourist and transit destination for Indians.

However, last Friday, the Serbian government declared India as an area of concern and introduced a seven-day quarantine for passengers arriving from the country.

“Serbia has become a popular transit point for Indian students going to Canada. In this month, we have had 20 customers so far,” said Madhav Pai, founder of WOW Holidays, a Delhi-based destination management company.

But the quarantine requirement is now forcing students and families to reschedule travel plans or change itineraries.

Egypt and Mexico are also serving as transit-cum-quarantine points for Indians heading to Canada and the US.

H1 visa holders, students and those who came to India to meet their families have taken this route to return to the US.

“We had organised flight tickets and arranged hotel accommodation and meals for passengers who went to the US via Egypt in May.

“The basic essentials were covered and there was no sight-seeing,” said a tour operator from Mumbai, asking not to be named.

“We advised them to stay in the hotel and follow Covid-19 precautions. It would have been a challenge had even one traveller contracted Covid-19 during transit.

“Thankfully, the trip went smoothly and they travelled to the US without a hassle.”

Overseas education consultants, however, are advising students against travelling to Canada and the US via a third country.

“We are cautioning students not to take the route for entering Canada through other countries because there could be immigration issues later when they land there,” said Rushali Kapadia, senior overseas education expert at Yocket, a consulting firm.

“However, the number of students going is small because it is only those who were already studying in Canada and had study permits but came to India for a break who are trying to return via other countries.”

Students, who are applying for the first time to study in Canada, are yet to get study permits or visas since the process has just begun and is more cumbersome and time consuming than for the US.

Students flying to Canada via other countries like Serbia are worried their study permits might expire and that they may also have to bear quarantine costs, which they are trying to avoid, say consultants.