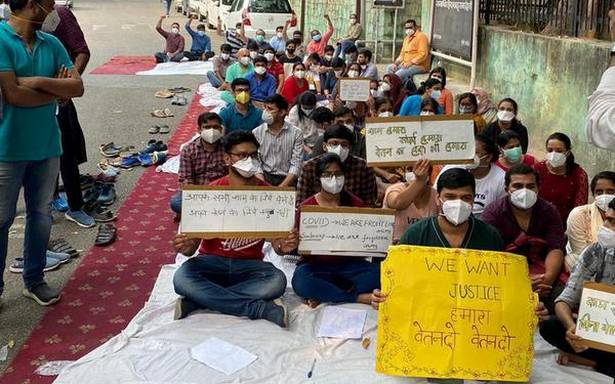 Doctors and nurses of the North Delhi Municipal Corporation’s Hindu Rao Hospital on Wednesday continued their protest over non-payment of salaries “for the last four months”. The stir is likely to spread and intensify as over 1,200 doctors working in other hospitals run by the North Corporation have given a notice for a strike from October 19 over the issue.

The Resident Doctors’ Associations (RDAs) of three North Corporation hospitals — Hindu Rao, Kasturba Gandhi and Rajan Babu TB — also issued a joint statement on Wednesday that salaries have not been paid for the past four months and they will continue to protest from a “common platform”.

Doctors from the other two hospitals are set to join the protest at Hindu Rao premises from Thursday.

“I have borrowed money from my parents in the past four months. I don’t know how I will pay next month’s rent,” Dr. Bawa added.

The strike notice by the Municipal Corporation Doctors’ Association (MCDA), sent to the civic body commissioner, said they will go on “indefinite strike” from October 19 if their demands are not met, including release of pending salaries, arrears and pensions, and the transfer of hospitals, dispensaries and other healthcare facilities of the North Corporation to the Centre.

“This [non-payment of salaries] has happened multiple times with the North Corporation. Doctors had to resort to protest in 2016 as well,” said R.R. Gautam, president of the MCDA.

Dr. Gautam said that emergency services at the six North Corporation hospitals will not be affected by the strike. He added that salaries of doctors and staff of all healthcare facilities of the corporation are pending since three-four months.

“The civic body had earlier tried transferring the hospitals to the Centre but they did not take them. We give funds to the civic body, but we are unaware of the expenditure since they do not get an audit done. A formal written proposal has been sent to the Centre to transfer these hospitals to the Delhi government,” Delhi Urban Development Minister Satyendar Jain said.