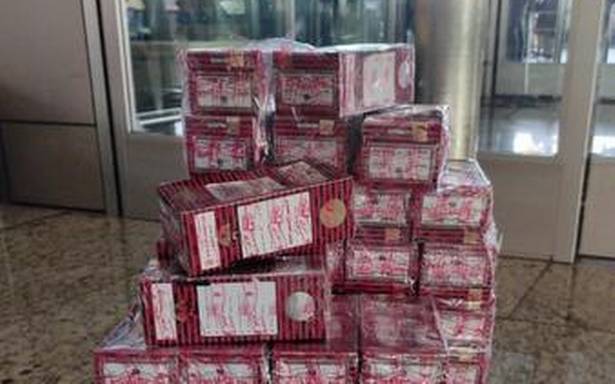 A spurt in smuggling of white sandalwood through Mumbai airport has been detected, with the seizure of over 100 kg of the commodity from several passengers over the past 10 days.

Widely sought for its medicinal properties and fragrance, sandalwood or ‘liquid gold’ is sought after in traditional medicine, woodworking, rituals, pharmaceuticals and perfumes.

In the latest instance on Tuesday night, the Central Industrial Security Force (CISF) personnel on duty recovered 25 kg of sandalwood chips from the baggage of two Sudanese nationals at Chhatrapati Shivaji Maharaj International Airport. The passengers have been identified as Abdelrahim Mirgani and Amma Rudan Habiballa, who were supposed to fly to Addis Ababa by an Ethiopian Airways flight at 11.05 a.m.

Mr. Singh said, “During X-BIS screening of their baggage, some doubtful images were observed by the CISF screener. On physical checking of their baggage, 25 kg of sandalwood chips wrapped in plastic packets were detected. During inquiry, the passengers produced the bills, but did not have any valid permission for carrying the sandalwood.” The passengers along with the recovered sandalwood were handed over to Customs officials for legal action.


On Friday, the CISF officials had seized 87 kg of sandalwood chips from two foreign nationals in separate incidents at the airport. Mohammed Abdelrahim Molabad Rahama, a Sudanese national, was found with 77 kg of sandalwood chips during the pre-embarkation security check at 8 a.m. His baggage was searched at Terminal 2 before he was to board an Ethiopian Airways flight to Addis Ababa. Mr. Singh said, “We found 9 kg of sandalwood in his hand baggage, after which he was taken aside for inquiries. Inspection of his check-in baggage revealed another 68 kg of sandalwood.”

The second flier, Elmoiz Osman Eljak Mohamed, also a Sudanese national, was supposed to fly to Doha by IndiGo airlines. Officials said he was selected for random checking on the basis of profiling and 10 kg of sandalwood chips were found in his hand baggage.

“In both incidents, the passengers managed to produce the bills, but did not have a valid permit for carrying the sandalwood chips. They were handed over to the forest department for legal action,” officials said.

Air Intelligence Unit officials of the Customs said while sandalwood products were consumed globally, Asia was the largest growth market, with China alone accounting for half of the expected demand growth.