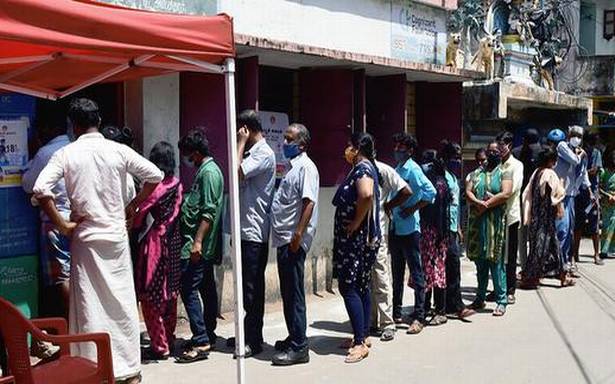 Under the Greater Chennai Corporation’s Mega COVID-19 Vaccination Drive conducted on Thursday, a total of 1,25,147 city residents got the jab. This is the highest one-day number of vaccinations the Corporation has achieved so far, a press release said.

The Corporation, in a bid to increase the number of vaccine doses administered, conducted 400 special vaccination camps under the drive, with two camps in each of the 200 wards across the city on Thursday, targeting a total of 1 lakh beneficiaries.

The number of those vaccinated, however, exceeded the target the civic body had set for itself.

Under instructions from the Chief Minister, the Corporation has been paying special attention to vaccinating differently abled persons, those suffering from high blood pressure and diabetes, pregnant women, lactating mothers and persons with tuberculosis. In addition, residents of slum areas were targeted under the drive, the press release said.

In a tweet on Thursday, the Corporation urged residents to get vaccinated by visiting 105 centres on Friday. Residents have been requested to book vaccination slots at https://gccvaccine.in

The Corporation has also announced that the online portal for booking vaccination slot for August 27 is open. As many as 45 centres in slums, 15 urban community health centres and 45 centres in schools in residential areas will be open for vaccination on Friday. A special drive has been launched for those with hypertension and diabetes at some of the mini-clinics of the Corporation.