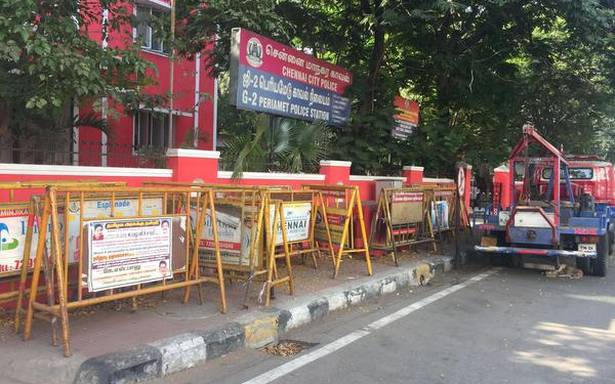 Encroachment of pavements is widespread across Chennai. But, what do you do when those who are supposed to keep a vigil on encroachments violate them, right in front of their office.

The Periament police has dumped seized vehicles and steel barricades and other materials on the pavement on Raja Muthiah Road, near Ripon Buildings, forcing pedestrians to walk on the carriageway of the congested stretch.

The stretch became a two-way a fortnight ago, after the Chennai Metro Rail handed it over to the civic body with improved features like a median, a widened tiled footpath and LED street lights.

“The Corporation should put an end to such illegal dumping on the footpath to ensure the safety of walkers,” said K. Anisha, a resident of Park Town.

Those walking at the intersection of Raja Muthiah Road and Baker Street do not have adequate space on the carriageway. The footpath on the stretch was convenient and safe to reach the main entrance of the Ripon Buildings. More importantly, the footpath was built to ensure safe access for train commuters to the newly-opened Metro Rail station near the western entrance of the Ripon Buildings. The re-introduction of two-way traffic on the stretch was delayed as the seized vehicles had to be shifted out. These were dumped on one side of the stretch (towards Choolai) near the police station by the Periamet police for five years, taking advantage of the Metro Rail work. Now, most of the seized vehicles especially mangled cars have been shifted to the rear side of the police station. The footpath is occupied by two-wheelers and steel barricades.

Raja Muthiah Road, earlier known as Sydenham’s Road, was made a one-way to facilitate work on the underground Metro rail stations. Earlier, vehicles from PH Road were allowed to use one side of the stretch towards Choolai while the opposite side of the stretch between the police station and the Corporation building is a no-entry zone as CMRL was constructing its western entrance of its station there.

A portion of Ripon Buildings was acquired for this purpose five years ago. Likewise, motorists coming from Choolai and Periamet on Baker Street have to use the link road abutting the Periamet police station to reach PH Road at Central railway station.

The Periamet police station moved to this two-storey building more than a decade ago. It has adequate space for parking and to store seized vehicles at its backyard. However, to prevent illegal parking, especially parking of cars by traders along the stretch, the Periamet police have dumped its seized vehicles on one side of the stretch along the station premises. Earlier, pedestrians used the unused portion of the stretch especially towards Ripon Buildings where Metro Rail work was under way. As a result, dumping of vehicles did not cause any inconvenience to pedestrians as they had enough space to walk. However, with the introduction of two-way traffic and dumping of material on the new pavement by the police, pedestrians movement as they walk towards government offices and facilities in Park Town, is hindered. “We can’t dump all our material including seized vehicles at the police station premises as we need space for parking vehicles of senior police officers. We use the footpath in front of our station to store certain material including steel barricades,” says a police personnel.