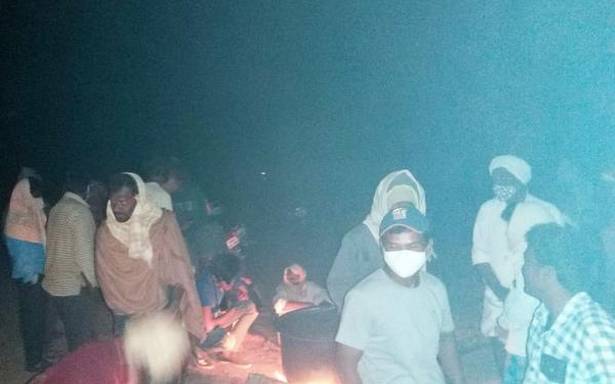 The land oustees of Gouravelli lift-irrigation project at Gudatipally and adjoining hamlets of Akkannapet mandal of Siddipet district continued their protest overnight after a clash with police when they stalled works on the project demanding higher compensation on Thursday.

They question the rationale behind taking up works before fulfilling the promises mad to them. The oustees also pointed out that the officials had violated the assurance given to the National Green Tribunal (NGT), South Zone, Chennai, a few days ago. The petition was filed by Baddam Raji Reddy and others.

“Mr. Ramachandra Rao, Additional Advocate General (AAG) for State of Telangana submitted that no work is being undertaken in proceeding with the project and even prior to filing this original application, the work has been stopped and it was also mentioned by the Joint Committee in the report that no work is being under taken at the time of inspection. The AAG further submitted that they are not undertaking any work in implementation of the project and they are not dispossessing the persons who are likely to be affected by the project on the basis of the new acquisition to be undertaken,” read the order issued by the NGT on December 20, 2021, the date of hearing.

Hardly 72 hours after giving an assurance to the NGT in black and white, the officials of the State Government violated the orders not bothering about consequences, alleged oustees. Around 11 a.m. on Friday the police force was withdrawn.

The outees prepared food and stay put there, covering their bodies and faces with winter protective gear. Their agitation was continuing at the time of last reports as no revenue officials visited the site and held discussions with them.

In a related development, the police registered cases against a dozen persons belonging to Gudatipally and surrounding villages holding them responsible for the attack that took place on Thursday in which Husnabad Sub- Inspector Sridhar was injured. However, there was no mention of protesters injured in the police lathicharge.