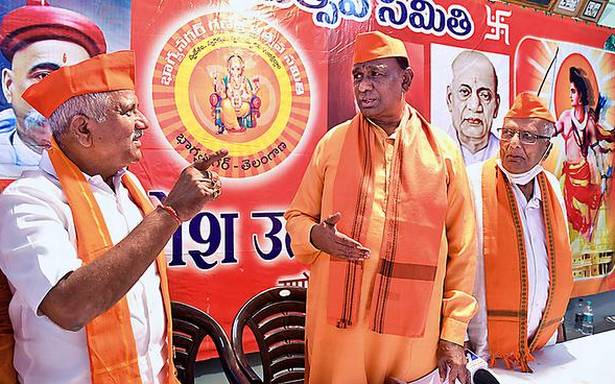 The Bhagyanagar Ganesh Utsav Samiti has demanded that the State government promulgate an ordinance to circumvent court directions and ensure immersion of Ganesh idols made of plaster of Paris in Hussainsagar.

Addressing a press conference, samiti general secretary M. Bhagwant Rao said it was alright if the Special Leave Petition coming up before the Supreme Court on Thursday allowed the immersion. But, if it did not happen, the government should promulgate the ordinance like the Tamil Nadu and Kerala governments over religious evens.

He added that freedom of worship and right to religion were fundamental rights which could not be denied to citizens by courts or governments. The immersion was a traditional event on the days to mark Ananta Chaturdasi every year after the idols were installed. So, the government was duty-bound to promulgate the ordinance in the event of the Supreme Court banning immersion on Thursday.

Mr. Rao said there were no laboratory reports on water samples of Hussainsagar before the High Court to substantiate the argument that the immersion of PoP idols contaminated its water. The reports of Pollution Control Board did not vouch for pollution.

If the argument that PoP idols polluted water, the immersion should not be allowed in any of the lakes and not just Hussainsagar.

The government had not projected a correct picture on immersion to the court, he said.

The samiti gave a call for dharna and rasta roko at 50 centres in Hyderabad from 10 AM to 11 AM on Thursday to resent the ban. It organised bike rallies near Ganesh pandals and main thoroughfares.