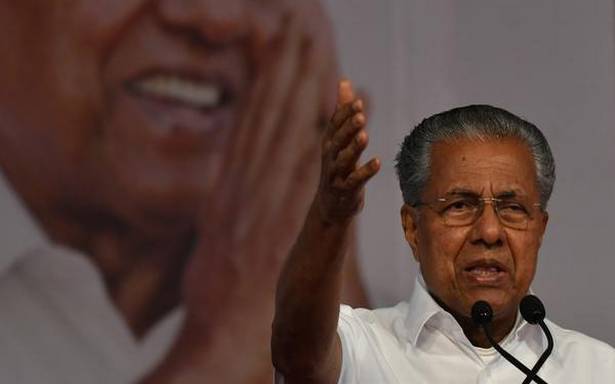 ‘Top brass of the Congress and the BJP, who flew down to the State, are trying to portray the corruption in Kerala,’ he says

Kerala Chief Minister Pinarayi Vijayan has said that opponents of development have united and are spreading false stories to defame the State and the Left Democratic Front (LDF).

Addressing a press conference in Kannur on Thursday, he said “fake messages, copies of forged documents, and voice imitation” were being used to spread fake stories.

He said that in the last few days the top brass of the Congress and the BJP, who flew down to the State, were trying to portray the corruption in Kerala.

Transparency International, who did the survey, had found Kerala governed by the LDF was the least corrupt State. However, they found Rajasthan, which was ruled by Congress, as the most corrupt.

They were now threatening to close down the KIIFB, and the United Democratic Front (UDF) convener publicly announced to close down LIFE project. The Central agencies were being used to arm the destructive politics of the UDF.

“What are they intending to achieve by targeting KIIFB? Does this mean that school road, hospital and bridges in the country should no longer be developed,” he asked

Mr. Vijayan said those who “committed genocide in Delhi and Gujarat” were coming to Kerala and talking about violent politics. It was better for such people to look at their own faces in the mirror, the CM said.

So far, the Opposition had not been able to prove that any of the allegations against this government were credible. This was evident in the pro-LDF mass movement across Kerala and that was what had reflected in the election surveys.

The Chief Minister while responding to the allegation made by Opposition leader Ramesh Chennithala in the deep-sea fishing controversy said that Industries Minister E.P. Jayarajan had ordered the cancellation of the Memorandum of Understanding. A report had also been submitted. Even the application for a 4-acre land for which the EMCC company had not paid any amount had been cancelled. However, there was an attempt to mislead him by saying that the contract had not been cancelled. He said Congress was the “real culprit” who betrayed the fishermen. Further on the issue of double vote, Mr. Vijayan doubted whether it was Congress which deliberately added double votes.

04/01/2021 India Comments Off on Opponents of development are spreading lies and defaming Kerala: CM Pinarayi
India