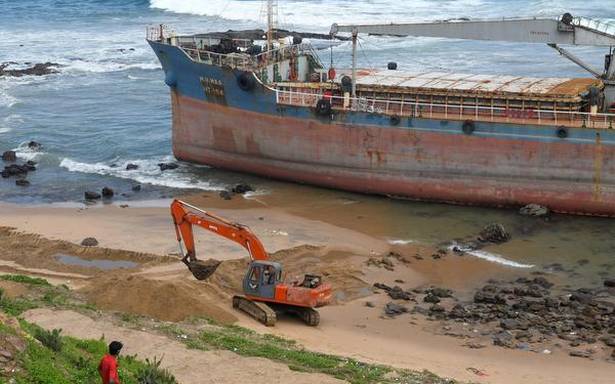 It involves two phases and may go on for a month

The operation to tow out the 3000-tonne Bangladeshi ship MV Maa that ran aground near Tenneti Park in Visakhapatnam on October 13, began on brisk footing here on Friday.

The Protection and Indemnity Club which is responsible for overseeing the operation on behalf of the owners of the ship, have appointed Visakhapatnam-based Gill Marines, a company that specialises in such operations, to remove the oil (fuel) that is stored onboard the ship.

Meanwhile, as per the Visakhapatnam Port Trust (VPT) officials, the owners of the ship have appointed Mumbai-based Resolve Marines to take up the salvage operation and re-float the vessel. Deputy Conservator of VPT Cpt Mohanti said that the entire operation had two phases – first the oil had to be removed and the second stage involved salvage, re-float and pulling the ship back to safer waters. “To begin with, oil is being removed and we have also placed our team to check that there is no oil spill,” he said.

On Friday, earth movers were seen clearing the sand from the road front to the aground ship, to enable free movement of men and material.

The owner of Gill Marines, Surender Gill, told The Hindu that though the ship was small in size and weighed just around 3000 tonnes, it was going to be a complex and challenging task and might take about a month.

Right now the operation is focussed on removing about 40 tonnes of fuel that is stored onboard the ship. This will make the ship lighter and it is necessary as per protocol to avoid any oil spill, and to contain any damage to the ecology and environment.

How it is done

Speaking about probable salvage procedures, Mr. Gill said once the oil was transferred from the ship, efforts would be made to create tunnels under the ship by using specialised equipment such as high-power water jets, so that balloons could be laid under the belly of the ship.

The flat balloons would be inflated to lift the ship and free it from the sand and rocks, on which it was sitting now, he said.

What makes the operation complex is that the key factor is high tide. Everything has to synchronise – the inflation of the balloons has to coincide with the high tide timings and only then tugs can be deployed to tow it out.

The rocky terrain of the Tenneti Beach is another challenge, as a small mistake can rupture the belly of the ship, and it could then be disastrous.

If required, the ballast tank would be emptied, to make the ship lighter, Mr. Gill said.

The work is under way in coordination with the authorities from the VPT, Indian Coast Guard, District Administration, Marine Police, P&I Club and DG Shipping.