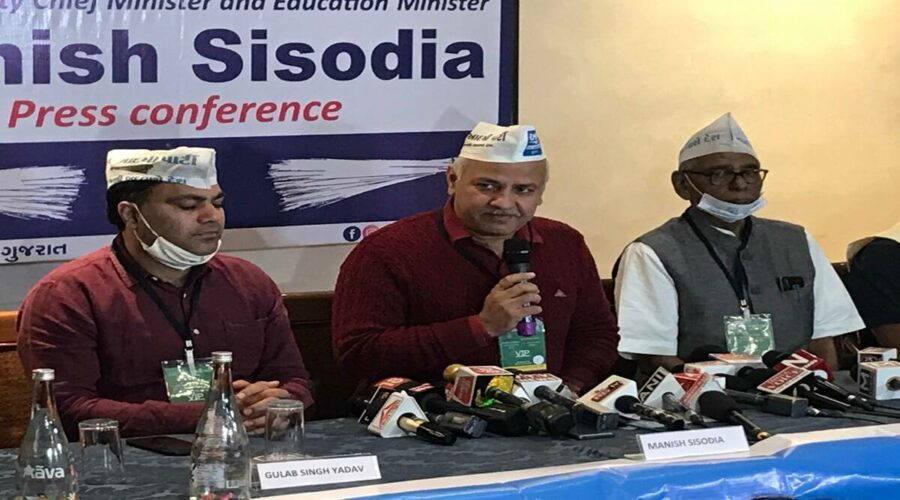 In Gujarat, polls to the six municipal corporations in Ahmedabad will be held on February 21, while elections to 81 municipalities, 31 district panchayats and 231 taluka panchayats will be conducted on February 28. Kickstarting a roadshow in Ahmedabad ahead of the local body polls, Delhi deputy chief minister Manish Sisodia said at an event on Saturday that it is “only the Aam Aadmi Party that has the substance to defeat the ruling Bharatiya Janata Party in Gujarat.”

Addressing a press conference in Ahmedabad today morning, Sisodia said, “Only AAP has the substance to defeat BJP and it has proved twice. In Gujarat, we don’t see ourselves as third alternative to BJP and Congress in Gujarat as we see both of them as one. People know that Congress has lost all credibility in Gujarat and they have no might over here. Has the congress held any Andolan against BJP in the past 25 years? People give vote to Congress only when they get angry with BJP and later those Congress MLAs switch over and join BJP.”

In Gujarat, polls to the six municipal corporations in Ahmedabad will be held on February 21, while elections to 81 municipalities, 31 district panchayats and 231 taluka panchayats will be conducted on February 28.

Sisodia further attacked the BJP over the issue of corruption saying that the AAP will provide a better alternative to the people of Gujarat.

“Whosoever becomes a councillor from BJP, they first try to get their own business sorted. Later BJP have to cancel their tickets next time due to their unpopularity. People in Gujarat are waiting for an alternative. In the past 25 years in Gujarat, the ruling BJP couldn’t fix the primary health care, no Primary health centres (PHCs) were made. Arvind Kejriwal took only five years to build a local health model. Today people can’t claim in a single city in Gujarat that they completely trust the government primary health care. In just five years, AAP has changed the face of Delhi. People in Gujarat have been inspired by our performance and joined us,” he said.

Sisodia also informed that Delhi Chief Minister Arvind Kejriwal won’t be arriving in Gujarat due to the ongoing farmers’ agitation in the national capital region (NCR).

“Why is the BJP favouring a few corporates and keeping aside the welfare of farmers in this country by bringing such laws? Kejriwal ji is stationed in Delhi right now to take care of our farmer brothers.”

02/06/2021 India Comments Off on Only AAP has the substance to defeat BJP in Gujarat, says Delhi Dy CM Manish Sisodia
TV & Movies