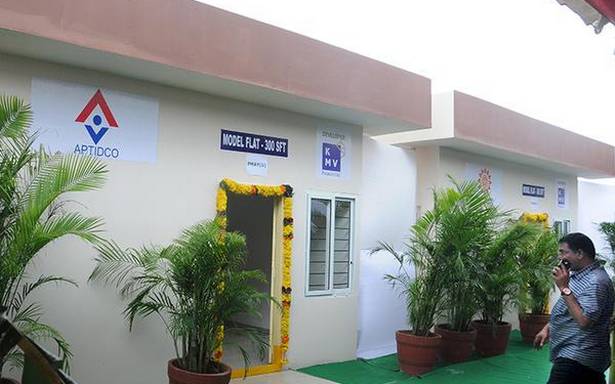 Less than 6% of houses sanctioned under the Centre’s flagship rural housing scheme in 2020-21 have reached completion so far this year, with COVID-19 stalling progress, the Rural Development Ministry told a Parliamentary Standing Committee last month. However, some States such as Odisha and Jharkhand used the scheme to provide employment opportunities for migrant workers who returned to their villages during the crisis.

With a little over a year to go to achieve its goal of “Housing for All”, the Pradhan Mantri Awas Yojana-Gramin has only completed 55% of its construction target, although money has been sanctioned for almost 85% of beneficiaries. Of the 2.28 crore houses to be built for the rural poor under the Yojana, less than 1.27 crore had been completed by January 28, 2021, according to the Committee’s report presented to the Lok Sabha earlier this month. Another 61 lakh are under construction.

The PMAY-G was launched in April 2016 and aims to provide a pucca house with basic amenities to all rural families who are homeless or living in kutcha or dilapidated houses by the end of March 2022.

According to data provided by the Ministry in 2019, it takes an average of 114 days to construct a house under the scheme. However, the advent of the pandemic caused long delays at every stage.

Implementation was “affected at the ground level due to unavailability of construction materials, labour, delay in inspection of stages of house construction etc,” the Ministry told the Committee. Although the nationwide lockdown in March 2020 brought work to a complete standstill, the Ministry issued an advisory to all States to start house construction activities from April 20, 2020, while adhering to safety protocols such as mask wearing and distancing.

Going by the Ministry’s data, some States which are the source of large migrant worker populations took advantage of their extra work force. Odisha completed construction of 10.5% of its 2020-21 target and began work on at least 85% of those for which money was sanctioned this year. Jharkhand completed 7.25% of the target and started work on more than 91% of houses sanctioned this year.

A number of other States such as Assam, Chhattisgarh and Karnataka did not see completed construction of even a single house sanctioned during the year.

Nationwide, the Ministry’s target was to sanction 63 lakh houses this year. Only 34 lakh were actually sanctioned, and only 1.9 lakh of those had reached completion at the end of January. Almost 19 lakh houses reached the lintel level while six lakh reached the later stages of construction with roofs ready to be added, the data presented to the Committee showed.

03/29/2021 India Comments Off on Only 5.4% of houses under Centre’s flagship scheme reached completion so far this year
TV & Movies