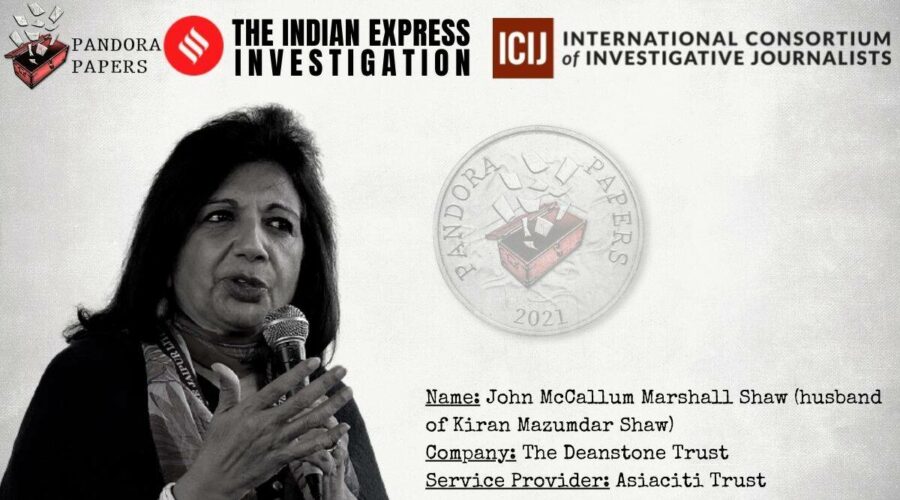 ON JULY 8 this year, market regulator Securities and Exchange Board of India (SEBI) barred Allegro Capital Private Ltd and its majority shareholder, Bengaluru-headquartered Kunal Ashok Kashyap, from trading in the stock market for a year, ordered disgorgement of wrongful gains of Rs 24.68 lakh with 12 per cent interest for three-and-a-half years, and penalised them Rs 10 lakh each for insider trading in Biocon Ltd shares.

What SEBI or the regulatory authorities did not know then was that Kunal Kashyap is the ‘Protector’ of The Deanstone Trust, set up in New Zealand in July 2015 by Mauritius-based Glentec International, the ‘Settlor’. Glentec, which holds shares of Biocon Ltd, is 99 per cent owned by John McCallum Marshall Shaw, a British citizen and husband of Kiran Mazumdar Shaw, Executive Chairperson of Biocon Ltd, a Rs 7,360-crore biotechnology enterprise.

The Deanstone Trust is part of a complex structure, as per records investigated by The Indian Express.

The Protector in a trust is appointed by the Settlor — one who sets up the trust or authors it — to supervise the trustee who administers the trust’s affairs.

In the case of Deanstone Trust, Kashyap, as Protector, was sought to be given powers to appoint and remove the trustee. He has been overseeing the trust’s assets since its inception in July 2015, according to Asiaciti. He, in fact, was Asiaciti’s contact for this transaction.

As Settlor, Glentec is the principal economic contributor to Deanstone Trust. In effect, Kashyap is a financial advisor and protector of the Trust whose corpus comes from Glentec.

What raises questions of corporate governance is: Should Biocon Ltd and Glentec International be using the services of Kashyap and Allegro Capital when there is an adverse order by the market regulator?

Asked about this arrangement with Kashyap, Kiran Mazumdar Shaw told The Indian Express: “Mr Kunal Kashyap runs a financial advisory service and has been used by Biocon as well as Glentec. Mr Kashyap advises several companies apart from Biocon. I understand that Mr Kashyap’s SEBI case is currently pending with SAT (Securities Appellate Tribunal) and hence it would not be appropriate for me to comment on this any further.”

Glentec International holds cash and investments of about $55 million, and real estate including four properties in London, one in Barcelona and one in a New York upscale residential building, cumulatively valued at approximately $30 million. “The properties have not been settled into the Deanstone Trust,” Kiran Mazumdar Shaw said.

Explaining the antecedents of Glentec, she said her husband set it up in 1999 as an investment company from his foreign currency earnings to acquire the shares that Unilever held in Biocon long before it became a publicly listed company and for various other investments in real estate and public markets. “Glentec is a registered entity disclosed to both RBI and SEBI,” she said.

“Neither my husband, nor I nor Mr Kashyap are either shareholders, trustees, directors, settlors or beneficiaries of the Trust,” she added.

The “beneficiaries” of the Deanstone Trust are relatives of KMS (Kiran Mazumdar Shaw), who holds an Indian passport, and JS (John McCallum Marshall Shaw) – Asiaciti Trust uses these initials to refer to the couple.

“Members of both our families are foreign nationals and beneficiaries of this trust. Any contribution received by any member of the family are in compliance with the laws in that jurisdiction,” Kiran Mazumdar Shaw said.

John Shaw is shown to be registered as a Director in Deanstone PTC Ltd in June 2016.