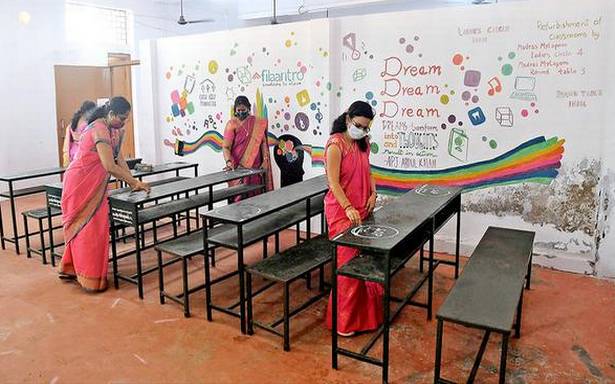 As schools gear up to begin in-person teaching for classes I to VIII from November 1, the School Education Department will convene a meeting on October 12, in which senior officials from all districts are expected to participate.

Chief Educational Officers (CEOs) from all district, as well as other officials from the department, will take part in the meeting, which will discuss preparatory work carried out ahead of the reopening of schools.

“At present, the focus is on ensuring that primary and middle schools begin cleaning their premises. While high schools and higher secondary schools have reopened from September 1, schools that have only primary and middle classes are to reopen after 19 months,” said a senior official from the department. He said in Chennai, a team of officials from the Greater Chennai Corporation and the department would visit schools to check cleanliness and hygiene.

At the zone-level in districts, officials were coordinating with heads of schools and briefing them on how classrooms, grounds and water tanks should be kept clean. Heads of schools have been asked to work with the local Parent Teacher Associations (PTAs), school management committees or other volunteers to get the premises ready for welcoming students back.

Meanwhile, a detailed SoP is expected to be released soon by the State government for schools reopening from November 1, similar to the one released in August for the resuming of in-person teaching for senior classes.