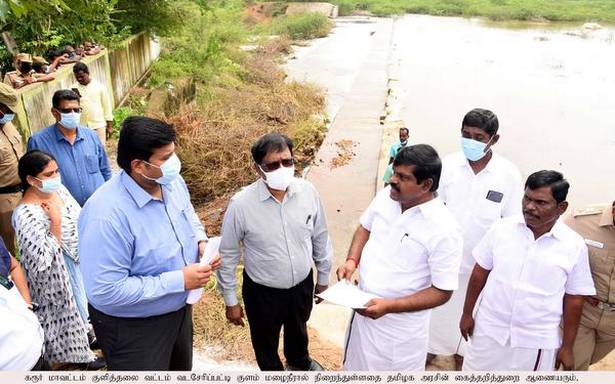 Accompanied by Collector T. Prabhu Shankar, Mr. Rajesh inspected the works being undertaken by the Karur Corporation to drain out water in Ganapathy Nagar, Jawahar Nagar and other areas in the city. He asked the officials to expedite the task on clearing the silt in Rettai Vaical.

Later, they made a visit to Kulithalai block, where standing paddy crop raised on various acres was inundated.

Mr. Rajesh said that several tanks including Vadaseri, Pathirikulam, Puzhutherikulam had reached their maximum capacity after a gap of 16 years. Several acres of paddy crop had been inundated mainly in Kulithalai block. Survey was initiated to figure out the crop damage.

Mr. Shankar said that teams had been working to drain out the water in low-lying areas. There was no rain on Thursday and the situation was under control, he said.