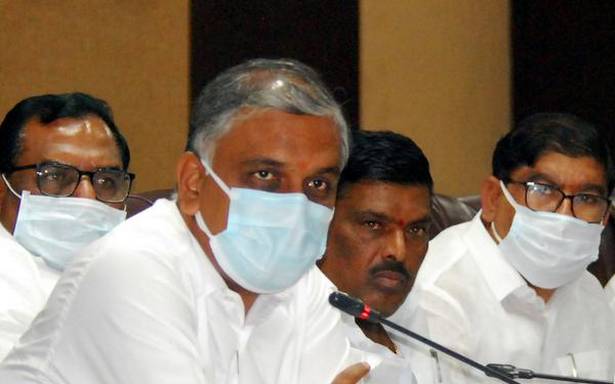 Minister pulls up officials for laxity

Minister for Finance and Health T. Harish Rao expressed his displeasure over the poor performance in administering vaccine to youth aged between 15 and 18 years and asked officials what stopped them from expediting the programme.

“It is not good on your part to delay the vaccination process when government gave clear instructions. Being Minister for Health I am getting a bad name because of you. How can you come to the meeting without full information?” Mr. Harish Rao asked while participating in the Zilla Parishad General Body meeting held at Sangareddy on Tuesday.

“Many people will be available at home on Sundays. Make use of it and send health workers house-to-house on that day and see that everyone gets vaccinated. Visit colleges, and administer vaccine to the students,” Mr. Harish Rao directed the officials.

TPCC working president and MLA T. Jayaprakash Reddy attended the ZP meeting and submitted a memorandum to Mr. Harish Rao urging him to continue out patient (OP) services at Sadashivapet old hospital and sanction of funds to the tune of ₹ 200 crore for the beautification of Mahaboobsagar. The Minister immediately directed the officials to continue OP services at the hospital.

The other issues included regularization of layouts in panchayats, funds for CC roads and drains at Sadashivapet and Sangareddy, extending metro rail service from Miyapur to Sangareddy and developing Sangareddy indoor stadium were discussed.