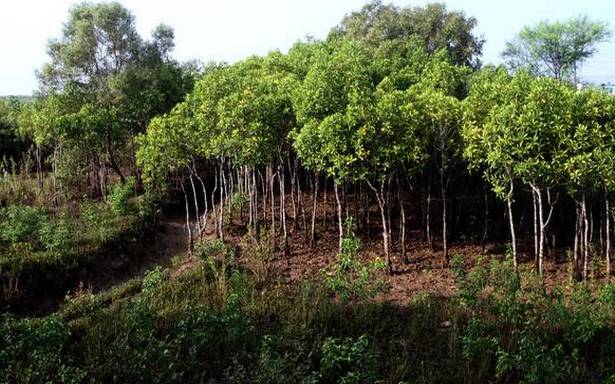 To mitigate the impact of cyclones, 3,500 hectares have been identified for coastal shelter belt plantation and 400 hectares for mangrove forests

When very severe cyclonic storm Yaas made landfall less than 50 km away from Odisha’s Bhitarakanika National Park in the last week of May, officials in the Forest and Environment Department kept their fingers crossed on the survival of the park’s rich flora. Spread over 145 sq. km., Bhitarakanika, one of India’s finest biodiversity hotspots was, however, largely untouched by the strong winds accompanying the storm surge.

Since the 1999 super cyclone that battered Odisha’s coast, six major cyclones have made landfall in the State, and mangrove forests have lived up to their reputation of being a bio-shield against strong winds each time, with little impact of cyclones in mangrove-forested regions.

According to the State Forest and Environment Department, only a 100-odd trees were uprooted and six small houses in the Habalikhati eco-tourism area suffered partial damage under Yaas’ impact. The total damage to the National Park is estimated at approximately ₹48.37 lakh.

Unlike inundation of 150 villages in the Bhadrak and Balasore districts in the storm surge, Kendrapara district, protected by a mangrove forest, was left largely unscathed.

Encouraged by this time-tested protection, the Odisha government plans to take up mangrove plantation in 400 hectares of land along the sea coast.

“We have 3,500 hectares of area available for coastal shelter belt plantation to mitigate the impact of cyclonic winds, and 400 hectares for creating mangrove forests in seven coastal districts. These areas have been identified to have bio-shields,” said Susanta Nanda, State Director of Environment.

Mr. Nanda said coastal areas, which are vulnerable to tidal wave ingress, would be preferred for mangrove plantation, whereas coastal shelter belts having sand dunes would be covered with casuarina and cashew plantations.

Odisha currently has 220 sq. km. (22,000 hectares) of mangrove forests. Most of it (192 sq. km.) is found in Kendrapara, around the Bhitarakanika National Park.

In fact, Kalibhanjdia island, spread over 8.5 sq. km. in Bhitarkanika, attracts the attention of scientists world over. It is a great assemblage of genetic diversity in mangrove forests, with 70% of all mangrove species found within the small area.

Apart from protecting the hinterland against cyclones and sea water ingress during tidal surges, mangroves stabilise the coastal land mass from sea erosion.

Mr. Nanda said a nursery would be developed for raising mangrove saplings.

“We have now stepped up our efforts to retrieve encroached coastal land, which are used for different prawn cultures. We plan to cover all vacant areas close to the coast with mangrove forests,” said Bikash Das, Divisional Forest Officer, Rajanagar Mangrove Division in Kendrapara.

While the government is promoting the plantation of mangrove species along the coast, there have also been individual efforts to prevent tidal ingress. For more than a decade, Bijay Kabi, a Kendrapada-based environmental activist, has helped regenerate mangroves in 25 acres of land and persuaded villagers to protect mangrove vegetation.

Under the impact of cyclone Yaas, areas such as Talachua, Rangani and Magarakanda in Kendrapara district were affected by tidal surge because these villages did not have enough mangrove plantations between the sea and human habitations, said Mr. Kabi.