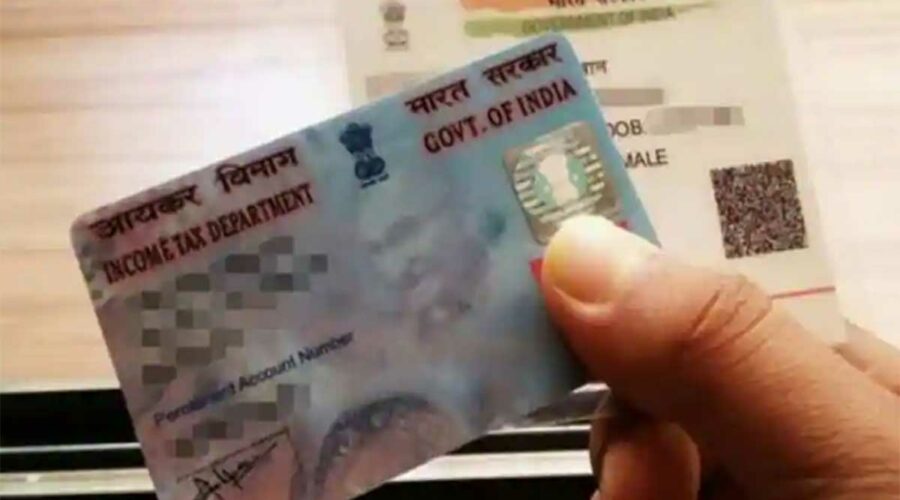 ‘Each state and central government body may be asked to update its system to ensure PAN is used as a common identification to access its services.’

The Union Budget 2023-2024 is likely to roll out the legal and operational framework for adopting the permanent account number (PAN) as a single business identification.

This will apply to all businesses securing approvals, a senior finance ministry official informed Business Standard.

According to the official, an enabling provision or clause may be introduced in the Finance Act, 2023, ensuring the “legal backing” for PAN is used as the primary identifier of an entity.

The provision will also ensure the mapping of PAN of an entity with multiple existing identifications.

Accordingly, it will be notified under various central and state legislations.

Currently, there are about 20 different identifiers at both the central and state levels.

The move will be in line with the recommendation of the working group, headed by an additional secretary (revenue) under the ministry of finance. The group submitted its report end-December.

According to the working group, the move should be implemented in a phased manner, starting with central departments, such as GSTIN.

The departments will be given a year to map and adopt PAN as the sole identity for all kinds of clearances, registration, licences, etc.

“Each state and central government body may be asked to update its system to ensure PAN is used as a common identification to access its services,” said the official quoted earlier.

The move will aid the ease of doing business by reducing the burden of compliance, streamline the process of starting a business, and even help the government enhance data-sharing and interoperability among agencies and departments.

The report endorsed PAN as a base identifier, considering its comprehensive coverage, wide acceptability, and relevance to all business entities.

Besides, it will be the least disruptive in terms of existing process flow at various departments and agencies, it highlighted.

However, the report also underlined the limitation of PAN, stating it did not capture unit-level entities. Moreover, entities that do not have PAN may be encouraged to get one.

The know-your-customer (KYC) requirements vary across ministries and departments.

More and more arrangements are being made to reduce the multiplicity of the KYC process. This step (single identity) leads to single KYC for availing of multiple services in one place, the report noted.

Further, the mapping and linkages with PAN ensure coherence in the KYC requirement among different government bodies.

The other advantage of this exercise can potentially trickle down to the interaction of businesses with non-government agents as well, as it happens in the case of banks programming their accounts with PAN, the report noted.

The report also recommended leveraging the national single window system to achieve the goal of the ease of doing business.

‘The system has already created the infrastructure for mapping various IDs of a business. It will further help government bodies to provide a single-point interaction for the businesses,; the report observed.

For that, the working group suggested making a PAN-based login instead of a single sign-in using an e-mail ID. This requires a single window system to prepare the architecture to exchange information with departments/ministries using PAN.

The idea of a single identifier for businesses was first expressed at a meeting of the committee of secretaries in October 2020.

It was reiterated at an inter0ministerial committee meeting headed by the finance secretary in July 2021. Thereafter, there has been deliberation with various departments, including the Department for Promotion of Industry and Internal Trade.

“The in-depth analysis of having one of the existing IDs as a single identifier or creating a whole new unique ID led to a consensus that PAN be adopted, and accordingly a working group formed in September 2022 to give the idea an operational push,” the official added. 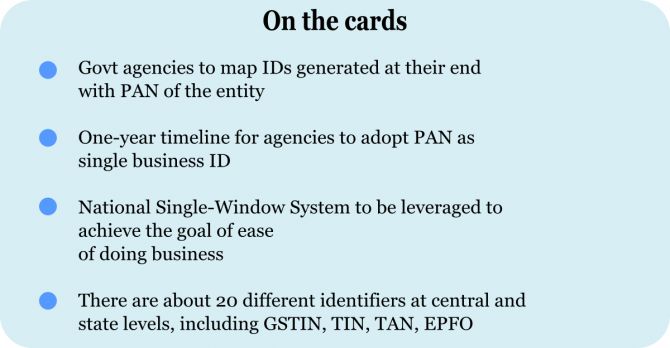