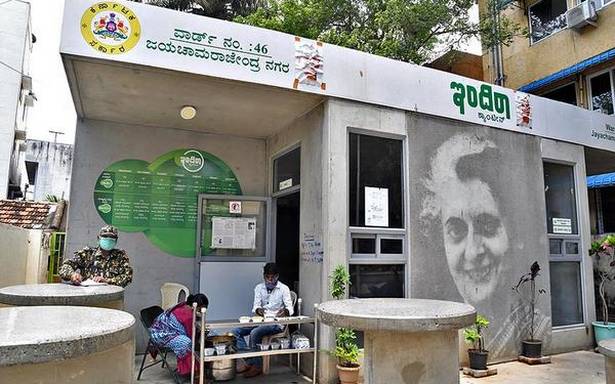 A week after rolling back norms that mandated collection of Aadhaar and mobile numbers of persons who receive free food packets from Indira Canteen, the Bruhat Bengaluru Mahanagara Palike (BBMP) has introduced a mobile application to monitor food parcel distribution, drawing ire.

Those distributing food are instructed to take photographs of the food parcels in the hands of the public and upload these images on the ‘Indira Canteen Parcel Distribution’ app. In case of more than three parcels being distributed to one individual, staffers need to take their phone number, a photo of the family’s ration card, and also distribute the food packets after logging in these details and receiving an OTP. With several glitches, the app has marred food distribution at many canteens and even when the app is working fine, it has delayed distribution.

Activists as well as Congress members have criticised the system as “irrational” coming from a “lack of knowledge and practical challenges on the ground”. Advocate Vinay Sreenivasa, working with urban poor, said he was at a loss to understand why the civic body has imposed so many restrictions when it comes to distributing relief to the poor. Taking photographs of people collecting food parcels will rob them of their dignity, he said, and called for the practice to be stopped immediately.

Tulasi Madineni, Special Commissioner, Finance, BBMP, also in-charge of Indira Canteens, said the app was introduced to check misappropriation by contractors. “The data being captured through the app from Wednesday has clearly shown the real picture of the number of parcels being distributed, tad fewer than being shown in the previous days,” she said.

Responding to criticism on photos being taken, she said there were clear instructions not to take photographs of the people’s faces, but only of food packets they hold.

She conceded that there were teething problems with the app and the technology team was working all day to fix issues and it will be streamlined in the next few days. “Contractors have an interest in the app not working. We are only trying to bring in some accountability,” she said.