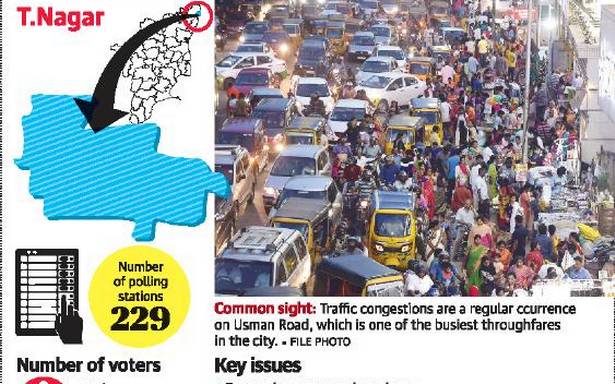 T. Nagar, the city’s commercial hub, has an unceasing list of woes that have not been addressed in the last five years. Water crisis, traffic bottlenecks, encroachments, building violations and poor connectivity are issues that continue to cripple the lives of people residing in the constituency.

The constituency consists of Kodambakkam, Ashok Nagar, West Mambalam, Pondy Bazaar, CIT Nagar and a few parts of Vadapalani. Around 22 candidates, including 10 Independents, are contesting from this constituency.

Sitting MLA B. Sathyanarayanan is the AIADMK candidate while the DMK has fielded J. Karunanithi. Pala. Karupaiah will be contesting from actor-turned-politician Kamal Haasan’s Makkal Needhi Maiam.

Voters in the constituency said the race would be between the DMK and the AIADMK as most of the other candidates had not even knocked on their doors.

Among the constituency’s problems is the encroachment by commercial establishments. “Thanks to the Corporation turning a blind eye, the pubic space is getting narrowed, impeding traffic,” said V.S. Jayaraman of the T. Nagar Residents’ Welfare Association. “Multi-storey commercial buildings have been built violating rules and without any kind of fire safety measures,” he charged.

Almost all streets have become parking bays for those who visit T. Nagar. Since the commercial complexes do not have enough space to park customers’ vehicles, they turn to nearby residential streets for parking purposes. This severely restricts the movement of residents. Senior citizens find it difficult to even go for a walk on the streets.

Residents also said the Pedestrian Plaza, part of the Smart City Project, was not up to the mark. Gopi Kannadaasan, a resident of Kannadasan Street, said even now one can see vehicles parked on footpaths. “The space was widened for children to play and all shop owners park their vehicles and no one questions them about it,” he said.

Mohan, a resident, points out that street vendors and small shopkeepers on Ranganathan Street, Natesan Street and on the main North Usman Road have no toilet facilities. “They have been demanding proper toilets for a very long time and the MLA has not made any effort to get this done,” he noted.

West Mambalam residents said waterlogging was a cause for concern and nothing had been done. “The Madley and Duraisamy subways get waterlogged even if there is a small spell of rain and this, in turn, creates traffic congestion,” a resident said.

For the trading community, the lockdown had created a huge dent in their business and they feel that the government has not done much for them. Many of them said they had put in a request for certain concessions and waivers but the government had not responded till now.