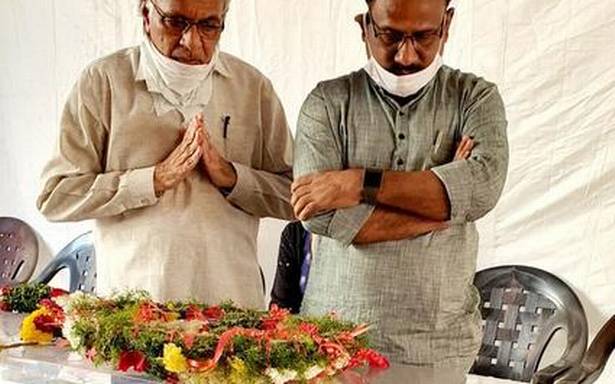 He was honoured with Sahitya Akademi award in 2017

Devipriya, a well-known poet, writer, journalist and Sahitya Akademi awardee, died of illness in the Nizam’s Institute of Medical Sciences (NIMS) hospital here in the wee hours of Saturday. He was 69.

Born in Guntur in Andhra Pradesh on August 15, 1951, Devipriya studied Telugu and English literature in the prestigious Andhra Christian College there. He pursued passionately both poetry and journalism with equal zeal although he became closer to commoners through journalism, particularly his daily political commentary run as a popular column by name “Running Commentary” in a few Telugu newspapers.

The writer had several books and compilations of poems to his credit and his compilation of newspaper editorials with title ‘Adhyakshaa Mannichandi’ (Pardon me, President) is one of the most read books not only by journalism students but senior writers too in the regional language and politicians of all hues.

Devipriya was honoured with kedriya Sahitya Akademi award in 2017 for his collection of poems – ‘Gaali Rangu’. He also bagged several other awards at the national and State-level for his contribution to the field of Telugu literature. He also bagged the Nandi film award as best lyricist in 1992. His documentary film script on saving the girl child also brought him the UNICEF award in 2010.

Among others, Devipriya also scripted two national award winning Telugu films, and one of his film lyrics still linger in the memory of people. His full length English documentary ‘Music of a Battles’ on balladeer Gaddar also brought Devipriya international recognition as a film-maker.

Recollecting his unique contributions to poetry, journalism, cinema, television and advertising fields, Chief Minister K. Chandrasekhar Rao expressed grief at the death of the celebrated writer. In a statement, he said Devipriya had created awareness among people through all of his art forms. He extended his heartfelt sympathies with the bereaved family.

People from different walks of life mourned the death of Devipriya and paid homage to him by visiting his residence in Alwal.