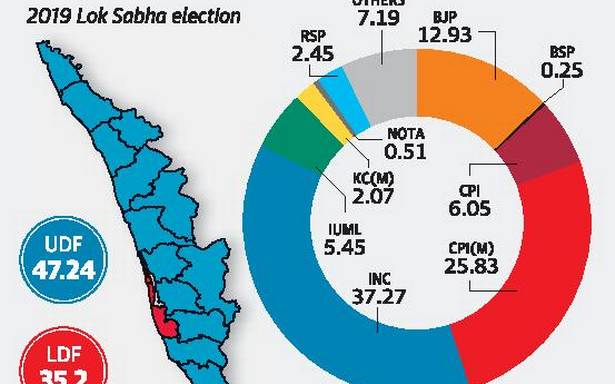 The Kerala verdict is not anti-LDF, not even essentially pro-UDF; there’s no ‘majority consolidation’ either. It is just anti-Modi

The popular narrative has it that it was a ‘minority consolidation’ that facilitated the dream-like run of the Congress-led United Democratic Front and the rout of the Left Democratic Front in the Lok Sabha election in Kerala. This reductionist view seems to be a gross under-reading of a very decisive political vote. And a devaluation of a significant democratic resistance by a sizeable chunk of the electorate.

The ‘minority consolidation theory’ gained traction during the unending TV debates that followed exit poll results. It says that one of the two major reasons for the spectacular victory of the UDF — a success rate of 95% — was the consolidation of the Muslim vote in Malabar and the Christian vote in the central Kerala and coastal regions.

True, Muslims and Christians, who made up 45% of the electorate, did vote for the UDF in higher numbers this time than any other recent elections. Dubbing this as communal would be unfair.

Rather, it was a decisive political vote which carried a clear political message: that a majority of the minority communities in Kerala did not want Modi as their Prime Minister. And, elections in a democracy is exactly for this: to choose your government, your ruler. More than a pro-UDF or anti-LDF vote, this was for them an anti-Modi vote.

Modi personifies it all

Just replay the campaign months: the openly anti-minorities speeches by top leaders of the country, the promise of a Hindu theocratic state and changes to the Constitution, the hyper nationalism, Pragya Singh, the dubbing of Wayanad as a mini -Pakistan. To the minorities, Narendra Modi personified all these and more. No wonder they desired him to go.

At the same time, Rahul Gandhi’s Wayand contest and the ripples it created across the State whipped up hopes of alternative politics. Soon, he became the focal point of the political aspirations of a major section of the minorities. Not that Mr. Gandhi pandered to their aspirations.

Throughout the campaign across the country, he and his party kept clear of Muslim issues. During his one-day campaign in Wayanad, Congress leaders made sure that the green flags of the Muslim League were not overly visible, though the majority of the audience was Muslim and the groundwork for his rallies and meetings were mainly done by League activists.

On the other hand, his widely publicised visit to the Thirunelly temple was aimed at the Hindu electorate. And the Congress had fielded only one Muslim candidate (and she got defeated, too). Still, Muslims in Malabar flocked to him and voted for his party’s candidates.

The notion that the minorities have deserted the Left camp is overstretched. It was just that they wanted Mr. Modi to go and they thought Rahul Gandhi’s Congress, not the Left, could force him out. They might return next year — for the panchayat polls.

The bottomline is: the minorities’ high five to the Congress was not the outcome of a communal polarisation. It was a decisive political act aimed to unseat Mr. Modi. It was not anti-LDF, not even essentially a pro-UDF vote. It was just anti-Modi.

05/26/2019 India Comments Off on Not minority consolidation, but a decisive political vote
India