A Bench headed by Chief Justice of India (CJI) N V Ramana sought to know if the proposed committee would also be able to look into the questions raised by the petitioners — to this, the Centre said that the court could include it in the terms of reference of the committee. 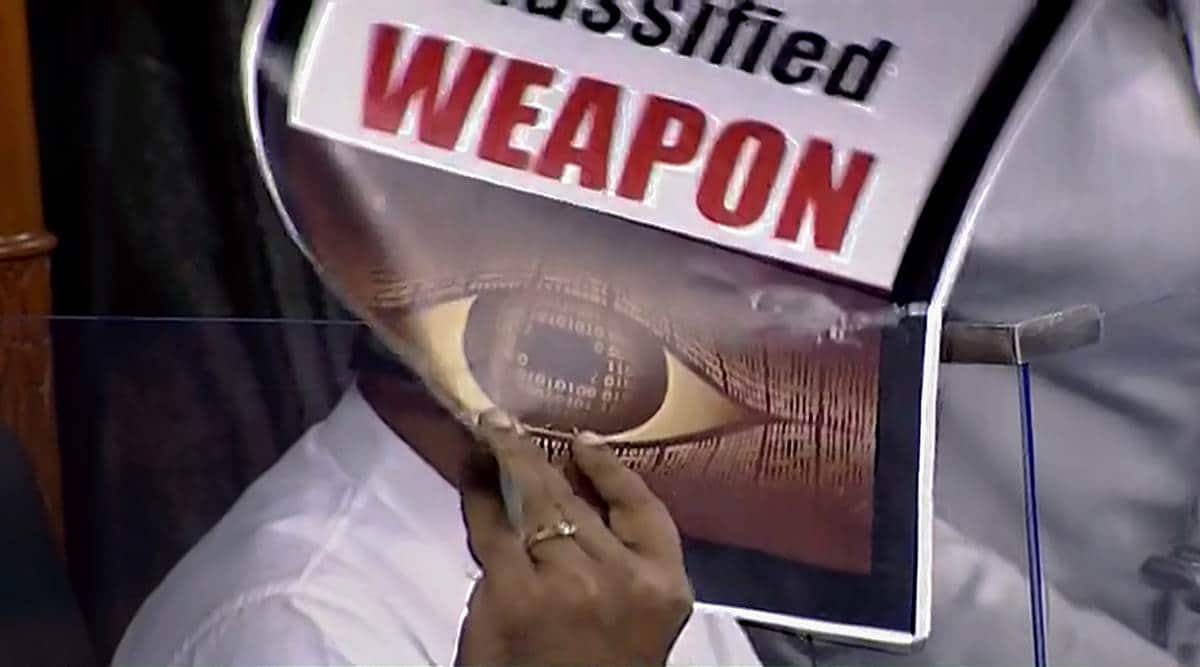 The Centre on Monday “unequivocally” denied all allegations made by the petitioners in the Pegasus matter; however, it told the Supreme Court in an affidavit that “with a view to dispel any wrong narrative spread by certain vested interests and with an object of examining the issues raised”, it would set up “a Committee of Experts in the field which will go in to all aspects of the issue”.

A Bench headed by Chief Justice of India (CJI) N V Ramana sought to know if the proposed committee would also be able to look into the questions raised by the petitioners — to this, the Centre said that the court could include it in the terms of reference of the committee.

After the petitioners pointed out that the Centre’s affidavit did not disclose whether it had purchased or used Pegasus, the highly sophisticated spyware developed by the Israeli cyber surveillance company NSO Group, the Bench, also comprising Justices Surya Kant and Aniruddha Bose, asked Solicitor General Tushar Mehta to tell the court by Tuesday, when it will hear the matter again, if he wanted to file any further affidavit in the matter.

The Bench told the petitioners that the “petitions have nothing to establish that” the alleged “violation is done by the State”.

Several petitioners have moved the court seeking a probe into the findings of a global media investigation, that the spyware may have been used to infiltrate phones used by a wide range of targets including critics of the government. The Israeli firm has said that it licenses Pegasus only to “vetted governments” for use against criminals and terrorists.

The affidavit by the Ministry of Electronics and Information Technology said the petitions were “based on conjectures and surmises or on other unsubstantiated media reports or incomplete or uncorroborated material”, and “cannot be the basis for invoking the writ jurisdiction” of the court.

It said the questions raised in them “stands already clarified on the floor of the Parliament” by the Union Minister for Communications and Electronics & Information Technology.

“The minister made it very clear that this is just a sensational matter published by a web portal just a day before the Parliament session was to begin. Nonetheless, this is a highly technical issue that requires high degree of expertise. We will appoint neutral, eminent people of the field. They will go into it and submit a report”, Mehta said.

“We are dealing with a sensitive matter, but the attempt seems to be to make it sensational,” he said.

Mehta referred to IT Minister Ashwini Vaishnaw’s statement in Parliament that there was no unauthorised surveillance, and added that “they would also know that illegal surveillance is not done”, and that “there is nothing to hide”.

He argued that there are statutory ways of interception, and added that “if this court feels convinced to go into (the claims), there would be issues of national security…

“It’s not that simple as whether Pegasus was used or not… Any facts being placed would necessarily involve national security implications.”

The CJI asked whether Mehta could put all that he wanted to say in another affidavit. Mehta replied: “If I file a one-page affidavit saying Pegasus was never used, are they willing to withdraw the petitions? No, they will cite something else. So if the court feel this needs to be examined on such [and] such aspect, we are willing to appoint a committee.”

He said: “If it’s a fact-finding inquiry, I’m fully supporting [it]. But if it’s for sensationalising…then I can’t say anything.

“Someone created 50,000 names… NSO itself says many of the countries in list are not even their clients… Our rules say unauthorised interception does not occur.. But nonetheless, if it needs to be gone into, I’m showing my bona fides. Allow us to have a committee of experts…let them go into it. The narrative that is sought to be created…let the truth be out… If at all anything is done, we have made it clear before the Parliament… But if there is any other object of petitions, I can’t help.”

The CJI said there were two issues. “Experts can go into questions of software being used or not. Other issues of permission, procurement…who will examine?”

Mehta replied that “they can be authorised by court order”, and that the “government will appoint independent neutral experts”.

“If court allows us to constitute committee of independent experts, not government officers, court can confer them with whatever jurisdiction… Your lordships may lay down the terms of reference.”

Appearing for petitioners senior journalists N Ram and Sashi Kumar and Editors’ Guild of India, Senior Advocate Kapil Sibal pointed out that the Centre’s “affiadvit doesn’t answer the issues raised by us… But this fact will have to be stated by them if Pegasus was ever used or not by government or its agencies. If they haven’t, our argument will have to be different. If they have, our argument will be different”.

Sibal also sought to know how the government, which is accused of having used Pegasus, could set up a committee to go into the allegations.

He recalled that the government had told Parliament in November 2019 that according to WhatsApp (which has filed a petition in a US court against the NSO Group), Pegasus was “used…to attempt to reach mobile phones of a possible number of 1.400 users globally that includes 121 users from India”.

The government must explain what it has done since, Sibal said. “Did they get in touch with the Israel government, with NSO Group?… This is a serious question, as many have said their phones were infiltrated.”

Apparently referring to the names of some journalists and staffers of the Supreme Court that have figured in the reported list of potential targets, Sibal said: “I’m more concerned with institutions…the two pillars of democracy…and both have been infiltrated. If registrars of this court…have been infiltrated, its not about Pegasus, but about institutions…of the only institution which protects the rights of people in this country.”

Sibal submitted that the Indian Computer Emergency Response Team (CERT-IN) deals with such infiltrations, and that under the 2009 IT Rules, the competent authority to authorise interceptions is the Home Secretary. However, the affidavit has been filed by the IT Ministry, he said.

Sibal pointed out that France had started an investigation and Israel had raided the NSO Group, but the “government (of India) is saying everything is fine…”.

The ramifications of the matter are wider than individual interceptions, he said — “let them (the government) state on affidavit, if they used (Pegasus) or not; if they did, under which circumstance”.

On the SG’s contention that national security implications were involved, Sibal said: “All that we want to know from the government is did they or any of their agency use Pegasus. There are no national security secrets there. It’s just a statement of facts.”

When the CJI responded, “When government is reluctant, how can we compel them to file new affidavit?”, Mehta intervened to say: “I’m not reluctant. I’m saying even if I say so (whether the government used Pegasus) they (the petitioners) will continue for other reasons.”

The Bench told Mehta: “If you have any change of mind, we will hear tomorrow.”

Appearing for WhatsApp, Senior Advocate Mukul Rohatgi, when asked his stand on the demand for a probe, said: “I have got nothing to do with Pegasus.” He also opposed former RSS ideologue K N Govindacharya’s plea to revive his 2019 petition which had sought an FIR and an investigation by the NIA against WhatsApp, Facebook, and NSO Group over alleged snooping.

Dismissing Govindacharya’s plea, the Bench told his counsel Senior Advocate Vikas Singh that he should file a fresh petition if he wanted a probe.

08/17/2021 India Comments Off on ‘Not as simple as if Pegasus used’, says Govt, offers panel to dispel ‘wrong’ talk
India