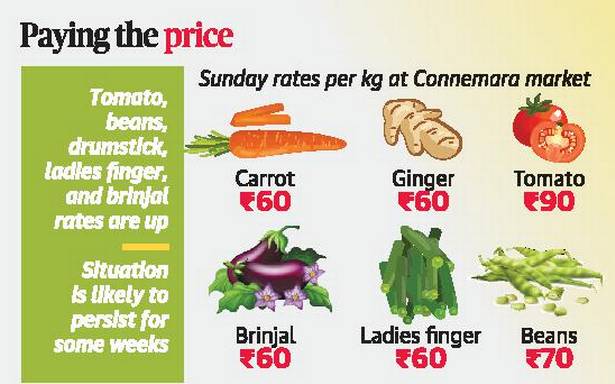 Household budgets are taking a severe beating as skyrocketing vegetable prices show no sign of easing.

The rates have shot up over the past few weeks due to the heavy rainfall and resultant crop damage in neighbouring States, traders here say.

Prices of most of the commonly used vegetables including tomato, beans, drumstick, ladies finger, and brinjal are up, and traders say the situation is likely to persist for some weeks.

Tomato was selling retail at ₹90 a kilo at the Connemara market in Thiruvananthapuram on Sunday, beans at ₹70 a kilo, and ginger and carrot each at ₹60 a kilo. Ladies finger and brinjal too are being sold at ₹60, vendors at the market says. “Tomato prices have risen from ₹40 a kilo, while the price of carrot and beans had been in the ₹30-40 range per kilo a few weeks back,” Chandran R., a vendor at the market says.

While the retail price of tomato was ₹90 a kilo and above in markets in Thiruvananthapuram, the Kerala State Horticultural Products Development Corporation (Horticorp) was selling the item at ₹78 on Saturday. In the State capital, Sunday morning prices of tomato on online platforms ranged between ₹90 and ₹130 per kg.

Cabbage cost ₹40 in the open market and beetroot ₹40. Ginger prices have shot up from ₹50 to ₹60 in the market.

Given the steep prices, vendors have also stopped offering ₹50 and ₹100 kits containing essential vegetables. “The kits are not viable for the vendors in the present situation,” K. Chidambaram, president of the Kerala Vyapari Vyavasayi Ekopana Samithi’s vegetable wing, says. “Prices have shot up steeply due to the heavy rainfall and the resultant crop loss in the State of Tamil Nadu, Karnataka and Maharashtra. We expect the situation to remain so for another month at least,” he says.

Price of some items

Meanwhile, the price of a few items, such as onion, has come down a little. Wholesale prices have dipped to ₹34, according to traders in Chalai market. On its part the Horticorp has stepped up procurement from farmers, as they also expect the present trend to persist, Joseph T.M., Regional Manager, Horticorp, says.

Finance Minister K.N. Balagopal on Sunday called for urgent measures by the Centre to curb the price rise. Talking to reporters here, he attributed the present situation to the heavy rainfall in neighbouring States, but added that the Centre’s unilateral decisions also were responsible for rise in prices of essential commodities.

Collective action was needed as the problem persists across the country, he said. On its part, the State Government was strengthening the public distribution system including the Horticorp and Consumerfed and making sure that ongoing PDS-related activities were not hit, Mr. Balagopal said.