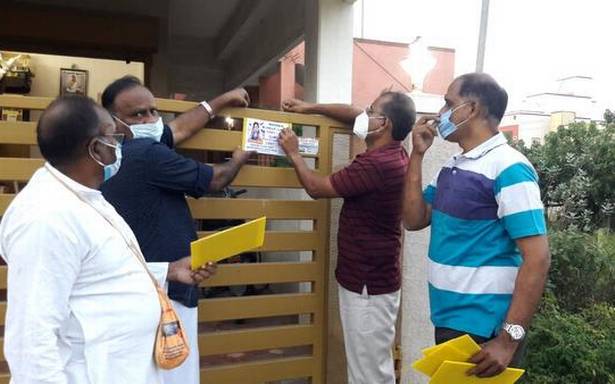 As the first project marking 2021, the RWA has replaced all the ‘No Parking’ signboards tied to the residents’ gates, usually placed there by commercial establishments, with boards that display the helpline numbers of various government agencies. So, in a need, the residents do not have to cast around for any of these numbers.

Venketachalam Nagar Main Road, which connects to Chennai-Tiruvallur High (CTH) Road, is the first road where the RWA launched the initiative.

Even signboards of this nature placed by commercial establishments at vantage points have on this key road have been similarly replaced.

The 40-feet-wide road has many shops and ATMS. More than 20 no-parking signboards have been put up by some of them at various points.

“The new boards are bound to benefit residents and shopkeepers, who in fact expressed interest in this project,” says A. Giri Ravanan, secretary, Venketachalam Nagar Residents Welfare Association.

Established over three decades ago, Venketachalam Nagar has more than 250 houses with over a dozen streets. The Puzhal lake is just a whiff away from this neighbourhood, found on the northern section of Thirumullaivoyal.

Most of the residents are retired government staff and small-time traders. On an average, each street has around four to five no-parking signboards to prevent cab drivers from parking their vehicles in front of the houses.

Residents have mobilised funds to install at least 200 boards displaying helplines in all streets and main roads. Apart from houses, banks, ATMs, Tangedco office and police booths would also have such boards.

The RWA has taken up many other initiatives in the past.

During the lockdown, they distributed Kabasara Kudineer twice a week; and free cloth masks, gloves and sanitisers to residents and frontline workers.