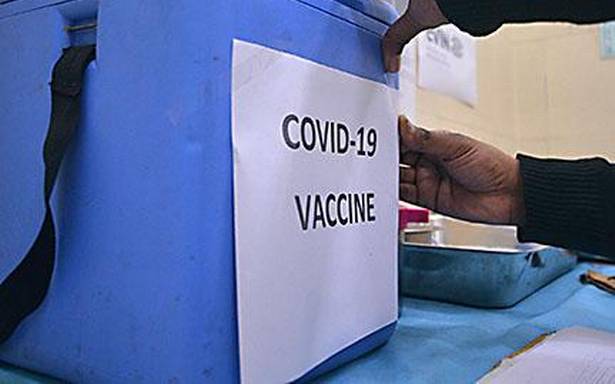 People would not have the option of making a choice between the two available COVID-19 vaccines – Covishield and Covaxin – when the roll-out starts on January 16, Union Health Secretary Rajesh Bhushan said at a press conference on Tuesday.

Four other COVID-19 vaccines were under trial currently in the country and that it had so far received “54,72,000 doses of the vaccine to be distributed, while 100% doses to be received by 14th Jan in all states/UTs’’.

“Our expectations from the States/UTs is that all logistics should be ready from January 16 and there should be continuous oversight and personal involvement in the entire process of roll-out. Also, there should be special focus on communication activities and utilisation of all types of channels to create an encouraging environment,” said Mr. Bhushan.

Indian Medical Council of Research (ICMR) head Dr. Balram Bhargava spoke about the vaccine regime that would be followed. “There will be a gap of 28 days between two doses and the effectiveness begins 14 days after the second dose. During the vaccination process and after that also, COVID-19 appropriate behaviour is a must.’’

Member (Health) Niti Aayog Dr. V.K. Paul said the two vaccines available in India were safe and that there should not be any doubt about this.

“They have been tested on thousands of people and the side-effects are negligible. All the vaccines in the world used currently against COVID-19 have been cleared under the emergency-use framework. As we go ahead, we will have more options. India has also been able to get these vaccines at very competitive prices,’’ he stated.

Mr. Bhushan noted that the situation was worrisome across the world with cases graphs still climbing in the U.S., the U.K., Brazil and South Africa. “In India, 12,584 new cases were reported in the last 24 hours and active cases continue to decline and it is now less than 2.2 lakh. Only two States currently have more than 50,000 active cases – Maharashtra and Kerala,’’ he added.

01/12/2021 India Comments Off on No option to select between 2 vaccines: Union Health Secretary
TV & Movies