As social media was filled with posts celebrating her as an inspiration for women and a model daughter-in-law, Niharika said she had no idea about the viral post until a local news channel approached her for an interview. 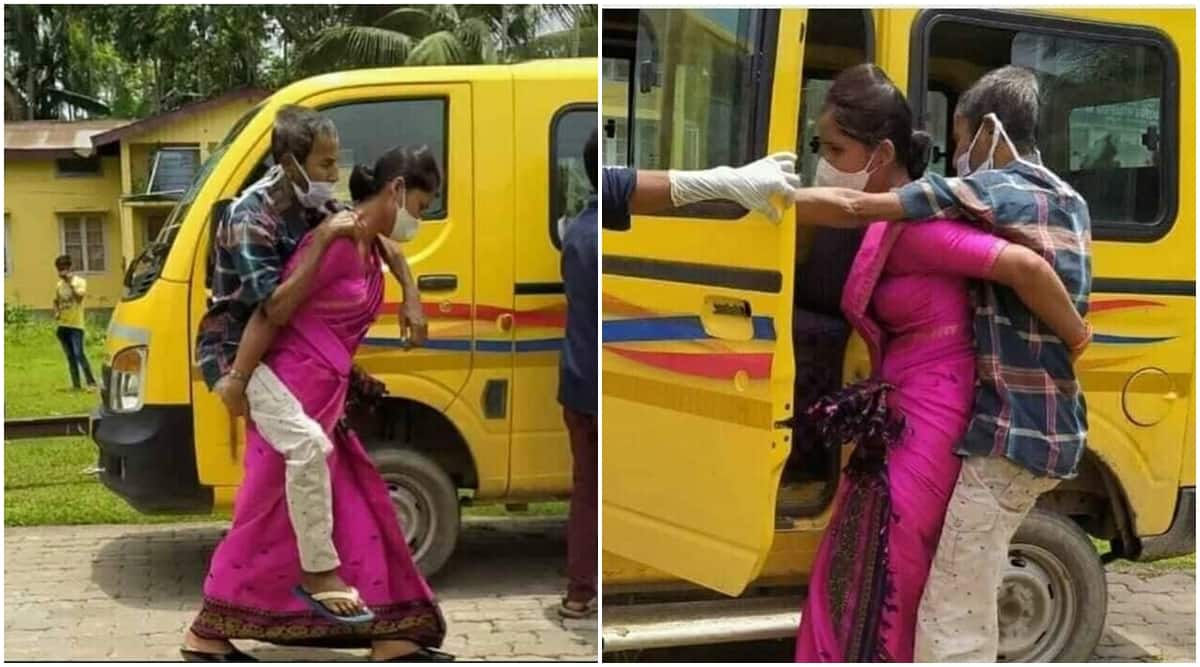 She was celebrated on Twitter last week when a photo of her carrying her Covid positive father-in-law on her back went viral. However, 24-year-old Niharika Das from Nagaon’s Raha says that she hopes no one should go through what she did.

On June 2, Niharika’s 75-year-old father-in-law, Thuleshwar Das, a betel nut seller in Bhatigaon village in Raha, started showing symptoms of Covid-19. Niharika then arranged an auto-rickshaw to take them to the nearest community health centre in Raha town 2 km away.

“But my father-in-law was too weak to even stand up. My husband was away at work in Siliguri, so I had no choice but to carry him on my back and take him to the vehicle parked at a distance,” said Niharika, who has a six-year-old son. She said that the road leading up to her house was not motorable, so the auto could not reach their doorstep.

But it did not end there.

After Thuleshwar tested positive at the community health centre, the authorities told them that he had to be taken to a Covid hospital 21 km away in Nagaon since his condition was serious.

“So we had to call for another private vehicle. There was no ambulance, or stretcher, so I had to carry him to the car again. People stared, kept a wide berth from us, but no one offered to help,” she said, “My father-in-law was almost unconscious and it took me a lot of strength — physically and mentally to carry him.”

That is when, unknown to her, someone clicked the duo — Niharika in a pink mekhela sador, her father-in-law on her back. The photograph has been doing rounds on social media since last week.

However, even at the Covid hospital, the authorities said that they were not equipped to deal with Thuleshwar’s condition.

“Finally, we were referred to the Nagaon Civil Hospital. Even there, I had to carry him on my back up to three flights of steps. I asked for help but no one was available,” she said, “I think I must have carried him for 2 km in total that day.”

As social media was filled with posts celebrating her as an inspiration for women and a model daughter-in-law, Niharika, who also tested positive, said she had no idea about the viral post until a local news channel approached her for an interview.

“Of course, I am happy that people felt good seeing the picture. Through the photo, the only message I want to send is that people should help each other– whether it is your parents, in-laws, or even strangers,” she said, adding, “It may not show in the photo but I was feeling lonely and totally broken.”

Pointing out that rural health infrastructure needs improvement, she said, “When I was stuck, an ambulance could have helped a lot. We took him to hospital in a small van for hire. Luckily, he did not require oxygen on the way — if he did, he would surely have died,” she said, adding that “people in all the hospitals were polite.”

As Thuleshwar’s condition worsened, the duo was shifted to Gauhati Medical College and Hospital on June 5. He succumbed to the virus on Monday night.

“I was very close to him and he would call me ‘xoru buari’ or younger daughter-in-law,” she said, “When he was conscious, I even showed him the photos of us which went viral. He was shocked and concerned about what people would say. I told him that people were actually praising us. He then joked and asked me where I got the strength to carry him,” said Niharika.

06/09/2021 India Comments Off on ‘No one offered help’: Viral photo shows Assamese woman carrying Covid positive father-in-law on back
India