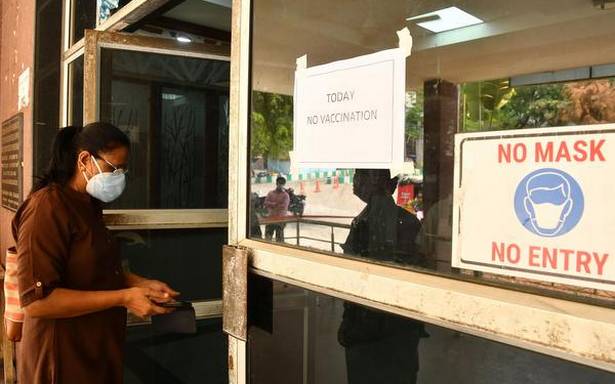 Move likely to put many citizens at a disadvantage; 18+ ask when they can book slots

Ending the anxiety over resumption of COVID-19 vaccination for people aged above 45 years, Director of Public Health G. Srinivasa Rao released a video on Monday evening stating the drive has restarted at the Government COVID vaccination Centres (GCVCs) for the age group across the State from the morning itself.

On Friday, Dr Srinivasa Rao had informed that immunisation programme will not held at the GCVCs during the weekend (May 1 and 2). After that, however, there was no communication from the official regarding the resumption until the video was released. By then, time for the day’s vaccination had already passed.

He stated that walk-in registrations has been stopped from Monday onwards. Slots have to be pre-booked on ‘cowin.gov.in’ for both, first and second doses.

Many, however, said that slots were not available for the next few days. Some others said despite booking slots for Monday beforehand, they were sent back from the vaccination centres without getting the shot.

Many citizens sought alternative options for those who are not tech-savvy and may not be able to navigate the Co-WIN portal for registering their names.

They particularly named the elderly staying away from their respective families, the poor who do not own electronic gadgets and the homeless as disadvantaged groups.

Dr Srinivasa Rao suggested that people who don’t have means to book the slots on their own can visit the nearest internet centre for the purpose. The suggestion, however, may fall short in completely addressing the concern.

Many who took their first jab are struggling to get the second one, due to insufficient stock of vaccines. One of the most asked questions is about the prescribed gap between doses.

Meanwhile, those aged 18 years and above took to Twitter to ask when they can start booking slots for the vaccination, which was opened to them from May 1. Though they have registered for the jab, slots for the age group were not displayed till late Monday evening. On April 28, the senior official had told the media that the standard procedure regarding vaccination for that particular age group will be out “in the coming two days”.

05/03/2021 India Comments Off on No more walk-ins allowed for vaccination at govt. centres
India