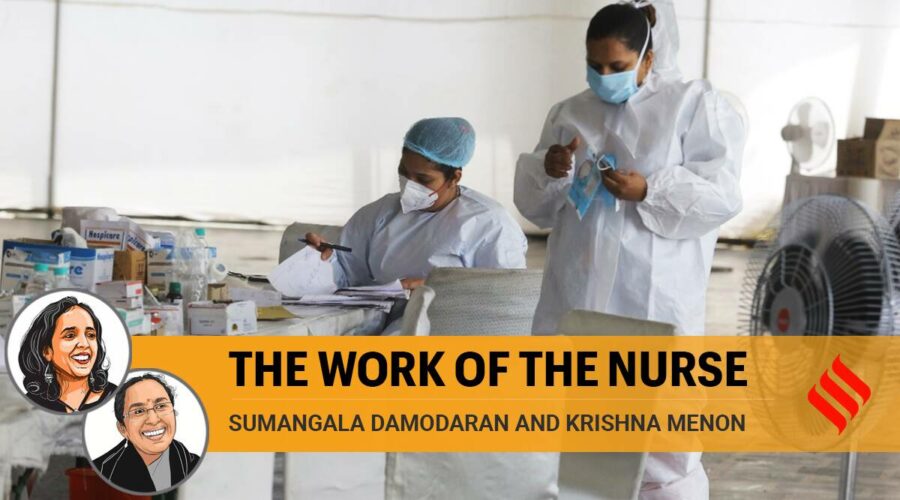 It is mistakenly seen as unskilled work, and cultural and linguistic differences are seen as threatening The circular issued recently by Delhi government’s Govind Ballabh Pant Institute of Postgraduate Medical Education and Research to nurses, forbidding them to speak in languages other than English or Hindi with each other, points to the challenges that nurses often face. Threatening “serious action” against nurses who spoke “especially Malayalam”, the circular was withdrawn a day later after protests from the nursing community and a campaign on social media. The threat in the circular was particularly appalling given the kind of gruelling work that the nursing staff and other medical personnel have had to put in during the second wave of the pandemic.

A large proportion of nurses in a city such as Delhi are migrant Malayali women. The predominance of nurses from Kerala has a specific history. A profession that involves touching other people’s, especially men’s bodies, carries a social stigma that is characteristically Indian or South Asian — it was work that did not attract women from most parts of India. One community that entered the profession and accounts for the majority of nurses from Kerala even today is that of Kerala Christians. Their relative openness to nursing had a lot to do with the active role that Christian missionaries and mission hospitals played in representing nursing as a noble Christian service. This helped destigmatise nursing work and encouraged families to invest in their daughters’ nursing education and allow them to go to far-off places for work.

Outside the state, nurses from Kerala have come to acquire a reputation for being efficient, willing and caring workers. Their work ethic and diligence, even under extremely challenging conditions, is something we observed at close quarters while researching a study for the National Labour Institute on questions of migration, work and identity among healthcare professionals, with a special focus on Malayali women nurses in Delhi’s hospitals. We were struck by the younger women who worked hard to save for their families and their own future and the older women who juggled parenting duties and household chores with long and arduous duty hours in alien socio-cultural contexts. We were especially moved by the experiences of nurses in the burns ward of government hospitals in Delhi and the tender care they administered to their patients, who were mostly women. They expressed great pride in the level of education they had obtained and their ethic of service and duty. They often got burdened with more work due to their diligence, a fact corroborated by supervisors and other senior staff in the hospitals.

During the pandemic, these workers have worked hard, and in most cases, worked overtime, doing double shifts over long periods. The Trained Nurses Association of India has determined that more than a hundred nurses have died due to Covid-19, including about 30 in Delhi. Sheeba, a young nurse, eight months pregnant, and Elisabeth Joseph, 45, were among the nurses who, because of their specific conditions, could not be vaccinated and yet continued to work and lost their lives. These are the women who must have chit-chatted with each other, cracked a joke to lighten their day, shared lunch and gossiped in Malayalam while also providing skilled care to the many who had thronged Delhi’s hospitals.

And yet, the stigma attached to what is seen as a lowly profession manifests in different ways. It is often seen as work that does not require a high level of skill or training, unlike doctors and surgeons. There is little data on the gendered nature of violence experienced by healthcare workers during this pandemic, but research before the pandemic had found that most violence is targeted at female nurses in emergency departments with long waiting times, in isolated places at patients’ homes, or in geriatric and psychiatric departments. In addition, women healthcare workers experience many forms of routinised violence that might not be physical in nature, but is discriminatory, intimidatory and threatening. This violence is intersectional in nature, expressed along race/religious/regional lines.

Care work is mistakenly seen as unskilled work, and cultural and linguistic differences are seen as threatening. The order to ban conversations in Malayalam, now wisely withdrawn, should be seen in this larger context of devaluing the work done by nurses.

This column first appeared in the print edition on June 11, 2021 under the title ‘The work of the nurse’. The writers are professors at Ambedkar University, Delhi.

06/11/2021 India Comments Off on No Malayalam, please: What does a Delhi hospital’s diktat say about the value placed on care work?
India