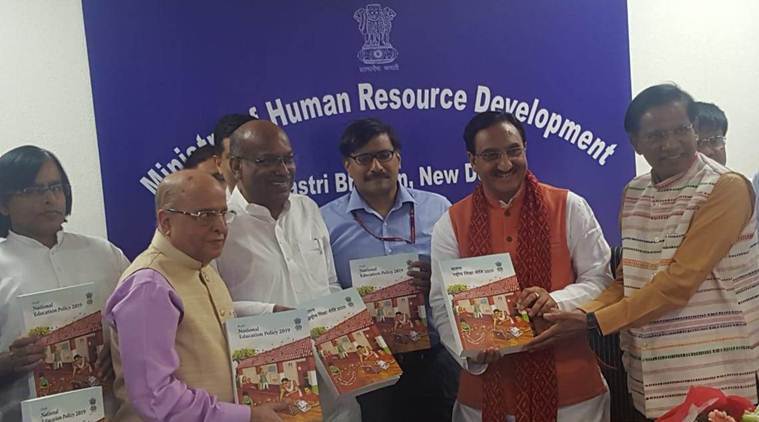 After political parties in Tamil Nadu protested over the recommendations of new draft education policy submitted to the government that suggested making Hindi a mandatory third language in schools, I&B Minister Prakash Javadekar Saturday said the Centre has no intentions of imposing any language on anybody.

“There is no intention of imposing any language on anybody, we want to promote all Indian languages. It’s a draft prepared by committee, which will be decided by govt after getting public feedback,” ANI quoted Javadekar, the former HRD minister as saying.

The Draft New Educational Policy 2019 submitted to the HRD ministry Friday coincided with new HRD Minister Ramesh Pokhriyal Nishank taking charge of his office. A committee led by former ISRO chairman Dr K Kasturirangan recommended the teaching of Hindi, English and one regional language in the non-Hindi states. For Hindi-speaking states, the committee recommended the teaching of Hindi, English and one of the modern Indian languages from other parts of the country. Tamil has been put into the category of classical languages by the ministry and it has not been made clear which languages fall into the modern language’s domain.

DMK chief M K Stalin opposed the draft policy’s recommendations, saying that his party will express their strong opposition in the parliament.

DMK leader T Siva in Trichy said the attempt to force Hindi language on people of Tamil Nadu will not be tolerated by people. “We are ready to face any consequences to stop Hindi language being forced on the people here,” ANI quoted him as saying.

Actor and Makkal Needhi Maiam leader Kamal Haasan said, “I have acted in many Hindi films, in my opinion, Hindi language should not be imposed on anyone.”

Hashtags #TNAgainstHindiImposition and #StopHindiImposition started trending on Twitter. The two hashtags had generated over 1.5 lakh tweets till 7:30 pm.

Tamil Nadu has for over 80 years opposed the imposition of Hindi as a mandatory language in the state.

06/01/2019 India Comments Off on No intention of imposing any language: Govt dismisses fears of Hindi imposition in Tamil Nadu
India